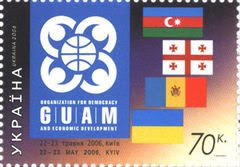 I was drinking my morning cup of coffee & studying the GUAM group of countries. (Georgia,Ukraine,Azerbaijan & Moldova)

All the GUAM folks have issues with Russia and those issues either fall into the category of frozen conflicts or aspirations to join NATO……
————————————————–
Georgia calls itself the “beacon of democracy” among its neighbors. This of course is nonsense. Misha Saakashvili is simply a thug who claims to embrace democracy to impress his Washington friends. And even those friends now have doubts about Misha after cracking down on peaceful demonstrators last year and less than honest elections. Misha’s goal is NATO membership. That is his strongest card to keep Washington on his side, if grudgingly. And Misha wants his neighborhood to join him.

The Ukrainian president is listening…

Probably the greatest political failure in recent memory is Viktor Yushchenko. He won a contested election in what was called the Orange Revolution. Since then, he hasn’t had a clue about governance. His popularity and his party’s have plummeted. As a result the ‘Gas Princess’ Yulia Tymoshenko continues ill-advised populism. Her only goal is to become the next Ukrainian president. Her personal ambition puts aside Ukraine’s real interests. She will do what Washington asks in the end. Her willingness divides Ukraine – needlessly.

Azerbaijan is only really at odds with Russia because of the “frozen conflict” Nagorno-Karabakh – that is 20% of Azerbaijan’s territory. Fair enough. But the fact of the matter is the Kremlin is not really choosing sides – neither Armenia nor Azerbaijan. Whatever resolution the two can find will be acceptable to Moscow. All Russia really wants is to avoid conflict in the post-Soviet space. At the end of the day, Russia pays a heavy price for conflict in the post-Soviet space – events throughout the 1990s stands out as a glaring experience.

Azerbaijan also wants its own energy foreign policy. Again fair enough – every country does, including Russia. Russia’s Gazprom recently has made it abundantly clear that both can a win-win situation with their partners. And this applies to other partners in Central Asia.

Moldova didn’t show up at the anti-Russia venue for the second year in a row. Why? Is it that the Kremlin bought it off? Hardly. What is in play is pragmatic geopolitics. Settling the Transdniestr “frozen conflict” seemed almost impossible. But, there has been progress. Moldova looks to stay out of NATO and Transdniestr stays (autonomously) within Moldova.

Let’s face it; Moldova has left GUAM for good. This is as it should be. It got what it wanted – territorial integrity and better relations with Russia. And Russia played the all-important role to make this happen. <---Link--->
————————————————-
This is a very unlikely group of countries to have any unity. They all have there own criteria & none of them have warm fuzzy feelings toward the other. So in the end you will see a collapse of this group that use to be GUAM but now is just GUA – M = GUA!