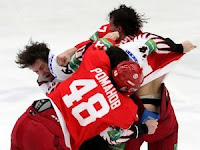 I talk very little about sports in Russia on this blog but when we get a story like this article and video. I have to say something!
Two Russian Continental Hockey League Teams: Avangard of Omsk and Vityaz of Chekhov turned into a non stop brawl just 4 minutes into play time. The match was permanently ended when so many players were kicked off the ice, that the game could not continue.

A huge fight between players has stopped a Continental Hockey League Championship match after just over four minutes of play.

A pitched battle involving players from Avangard of Omsk and Vityaz of Chekhov erupted just minutes after the face-off.

Match officials struggled to separate the teams and eject the offending players before the action resumed. Unfortunately, it was the wrong kind of action, as another fight broke out after just seven more seconds of play.

Tempers remained red-hot on the ice, when after more penalties there was yet more brawling. The referee finally scrapped the match, with only seven and eight players, respectively, left on each side.

Can anyone say Doofuses?