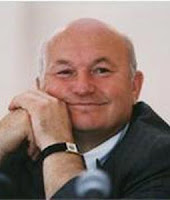 Hey Everyone,
I want to pass on a tidbit of information from the Mayor of Moscow, Russia:

The Moscow mayor, reported to newspapers on Thursday, that they need to just banish snow from the capital.

“Why don’t we just keep this snow outside the Moscow city limits?” said the Moscow Mayor Yuri Luzhkov, who has a fantastic record of controlling Moscow’s weather.

“For the surrounding area, this means more moisture and bigger harvests. And for Moscow this means less snow.” Luzhkov said, belaying that Moscow already relies on special cloud-seeding techniques to guarantee clear skies on key holidays and events.

Under Luzhkov’s proposal, the skies would be cleared whenever snow-laden clouds — a regular and natural feature of the Moscow winter cityscape — approached the sprawling Russian metropolis.

I was always shocked by the ability that Moscow has in making sure that they always have perfect weather for all the important events in the city. Three years ago I heard Svet talking about this habit of Moscow to control weather. So I know that they can do it because I have watched and seen it happen personally.
I would miss the snow covered Red Square and the Orthodox Church steeples all around town not covered in snow all winter…
Windows to Russia!
comments always welcome.