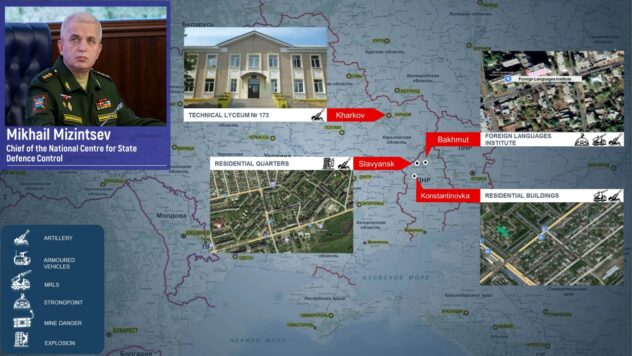 ​​⚠️ We continue to carefully record the facts of the inhumane treatment of civilians and use of residential buildings, educational institutions and social infrastructure facilities for military purposes by Ukrainian armed groups:

🔹 in Bakhmut, Donetsk People’s Republic, in the institute of foreign languages and in the civil registration office, militants of nationalist battalions have deployed their units, as well as armoured equipment, positions of mortar and MRLS crews at the adjacent territories, the approaches to the buildings have been mined, but the local population has intentionally been left uninformed;

🔹 in Kharkov, in the technical lyceum №173, neo-Nazis from Ukrainian armed groups have deployed a strongpoint, armoured equipment and artillery;

🔹 in Konstantinovka, Donetsk People’s Republic, in the residential buildings, AFU servicemen have deployed their firing positions, armament and munitions depots, as well as howitzers and MRLS at the local children’s playground, while the residents have been restricted from leaving their apartments under the pretext of security.

❗️ These acts commited by Ukrainian authorities show again their inhumane treatment to the lives of Ukrainian citizens and total disregard to all moral norms and principles of the international humanitarian law. It occurs with the tacit consent of the collective West that continues turning a blind eye to the numerous war crimes of the Kiev regime.

⚠️ On June 30, 2022, in Slavyansk, Donetsk People’s Republic, AFU units launched an artillery attack from the local compound feed plant at residential quarters in order to accuse Russia of eliminating the civilian population of Ukraine.

◽️ The attack has resulted in the death of 1 woman and injuring about 10 persons.

◽️ Just in some minutes after the shelling, reporters from Ukrainian mass media commenced their work at the incident location, started taking photo- and videographic data about the consequences of allegedly indiscriminate attacks launched by Russian Armed Forces at civilian population.

◽️ This kind of rapid arrival of Ukrainian journalists who supposedly happened to be around that way indicates a pre-staged scenario of this cynical provocation.

❗️ We emphasise again that the Russian Federation Armed Forces do not launch attacks at civilian infrastructure facilities and treat civilians with an exclusive humanity during the special military operation, unlike the Ukrainian side.

🇷🇺 Russian Defence Ministry publishes footage of the Chief of General Staff and First Deputy Minister of Defence General of the Army Valery Gerasimov inspecting the group of troops involved in the special military operation in Ukraine.

◽️3 battalions from 10th Mountain Assault and 72nd Mechanised brigades have lost over 50% of personnel near Verkhnekamenka and Zolotaryovka just in the past 24 hours.

⚠️ We continue to carefully record the facts of inhumane treatment to civilians and use of residential buildings, educational institutions and social infrastructure facilities for military purposes by Ukrainian armed groups.

⚠️ In Slavyansk, AFU units launched an artillery attack from the local compound feed plant at residential quarters in order to accuse Russia of eliminating the civilian population of Ukraine. The attack has resulted in the death of 1 woman and injuring about 10 persons.