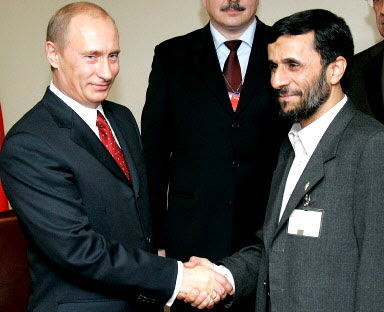 Mr Ahmadinejad said the latest report by the UN’s International Atomic Energy Agency (IAEA) showed Iran had been truthful about its nuclear activities.

The IAEA found Iran had clarified some of its nuclear history but questions remained over present activities.

The US has vowed to push for further UN sanctions in the light of the report.

The IAEA report praised Tehran for making progress in responding to questions about past activities but warned that the agency’s knowledge about Tehran’s current nuclear programme was diminishing.

It said that Iran was continuing to enrich uranium in defiance of demands by the UN Security Council.

“Selective co-operation” was “not good enough”, the White House said after the report’s release on Thursday.

Meanwhile, a meeting scheduled for next week to discuss further sanctions against Iran has been cancelled because China has pulled out, diplomats say.

Iran has portrayed the IAEA’s latest findings as a political victory.

“Since the first days, we have declared that Iran’s nuclear activities are lawful and in the framework of its legal rights, but the Western countries’ propagation networks and political pressures did not allow the Iranians’ voice be heard in the world,” Mr Ahmadinejad is quoted by state media as saying.

“Now the whole world has seen that the news was not true and Iran’s activities have been clean and peaceful and all the main questions of the IAEA have received their appropriate answers.”


Mr Ahmadinejad said the time had come for the US and its allies to change their behaviour. “Upon wrong and incorrect information you issued two resolutions,” he said, referring to two earlier rounds of UN sanctions.

“Now that you have found out that this information was wrong, you have to be brave and come forward and tell the Iranian nation ‘We made a mistake’ and apologise.”(RBC)

The USA just says that the report is wrong.