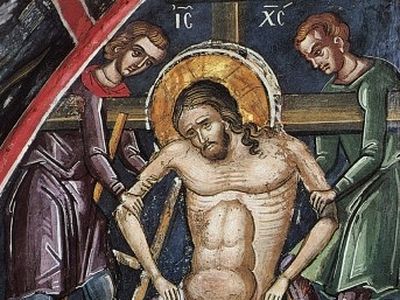 I hear occasionally from someone who sometimes accuses the Orthodox Church of being “foreign”, and so unsuitable for the British. A few days ago he sent me a card saying “the word in English is Easter”. My reply was “the word in Greek (and, therefore, English), is Pascha”.

This is a much more important subject than a mere dispute about words. If the word in English is Easter, then one is bound to ask “what word?” Was there some word which, when translated into English, became “Easter”? The plain answer is “no”. There is one simple reason for this, Jesus Christ in the days of his flesh never visited these shores, and his words were not written in English. He spoke Aramaic, and his sayings were recorded in Greek, as were the words of the other NT writers like Paul and Peter. An example of the desire to replace the word “Pascha” with “Easter” is the King James version translation of Acts 12:4 which describes the arrest of Peter by Herod and his intention “after Easter to bring him forth to the people”. The Greek word here is pascha, and all modern translations rightly now translate the word “Passover”

Source: It is Pascha not Easter! / OrthoChristian.Com