Here is the groundwork for the latest escapades in the Kerch Strait….and yes America was front and center… 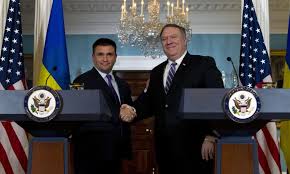 The text of the following statement was released by the Governments of the United States of America and Ukraine on the occasion of the 2018 U.S.-Ukraine Strategic Partnership Commission Meeting in Washington, DC. Media Note: Office of the Spokesperson, Washington, DC, November 16, 2018…

U.S. Secretary of State Mike Pompeo and Ukrainian Foreign Minister Pavlo Klimkin met November 16, 2018, in Washington, D.C., to hold a plenary session of the U.S.-Ukraine Strategic Partnership Commission. The plenary meeting marked the tenth anniversary of the U.S.–Ukraine Charter on Strategic Partnership, a document that enshrines the principles upon which the relationship between our two democracies is based. The plenary was also an opportunity to work toward implementation of the goals for the U.S.-Ukrainian relationship as outlined by Presidents Trump and Poroshenko during their previous bilateral meetings.

During the 2014 Revolution of Dignity, the Ukrainian people voiced their desire to live in a modern, democratic, European state, free from corruption and foreign control. Since the Revolution, the United States has provided over $2.8 billion in assistance and three $1 billion loan guarantees to help Ukraine defend its territory and implement key reforms. The United States remains steadfast in its support for Ukraine’s sovereignty and territorial integrity within its internationally recognized borders.

Secretary Pompeo and Foreign Minister Klimkin reiterated that cooperation between the United States and Ukraine is based on common interests and shared values, including support for democracy, economic freedom and prosperity, sovereignty and territorial integrity, energy security, and respect for human rights and the rule of law. They decided to create three new bilateral working groups focused on Security and Countering Russian Aggression; Rule of Law and Humanitarian Issues; and Economy and Energy. These groups will meet regularly to discuss areas of mutual concern and advance joint objectives. The 2018 Strategic Partnership Commission’s meeting featured inaugural sessions of each working group.

The two sides underscored the need to continue building Ukraine’s resilience in the face of Russian aggression, reaffirmed the importance of the Minsk agreements in ending Russia’s aggression, and highlighted the need to restore Ukrainian control over the Ukrainian territories temporarily occupied or controlled by Russia – Crimea and the Donetsk and Luhansk regions.

Both sides decided that a robust UN-mandated international security force in the areas of Donbas controlled by Russia, including the Ukraine-Russia international border, would create the necessary security conditions for the full implementation of the Minsk Agreements.

The United States reiterated its commitment to Secretary Pompeo’s July 25 Declaration on the non-recognition of Russia’s purported annexation of Crimea.

The United States condemned Russia’s aggressive actions against international shipping transiting the Black Sea, the Sea of Azov and the Kerch Strait to Ukrainian ports. Both sides underscored that Russia’s aggressive activities in the Sea of Azov have brought new security, economic, social, and environmental threats to the entire Azov-Black Sea region.

The United States confirmed its commitment to maintain sanctions against Russia related to its aggression against Ukraine until Russia fully implements the Minsk agreements and returns Crimea to Ukrainian control.

The United States welcomed Ukraine’s prolongation of the law on special order of self-government in certain areas of Donetsk and Luhansk regions on October 4, highlighted the many steps Ukraine has taken to implement the Minsk agreements, and called on Russia to fulfill its commitments under the agreements. The United States and Ukraine demanded the immediate release of all Ukrainian political prisoners unjustly held in Russia and the temporarily occupied territories of Ukraine, including Oleg Sentsov, Oleksandr Kolchenko, Volodymyr Balukh, Server Mustafaiev, Emir-Usein Kuku, and many others.

The two sides condemned the illegal so-called “elections” in Russia-controlled Donbas on November 11. The sides reiterated these sham elections, orchestrated by Russia, contravene Russia’s commitments under the Minsk agreements and flout UNSC Resolution 2202 (2015).

The United States and Ukraine confirmed the importance of the Budapest Memorandum of December 5, 1994, and called on Russia to fulfill its previous commitments to respect Ukraine’s sovereignty and territorial integrity within its internationally recognized borders.

Ukraine reaffirmed that becoming a NATO member remains its strategic priority, as recently enshrined in its legislation. The United States welcomed Ukraine’s NATO aspirations, reaffirmed by the 2008 Bucharest Declaration, and looked forward to one day welcoming Ukraine into the Alliance. The United States reiterated its support for Ukrainian efforts to implement the security reforms detailed in the Law on National Security, and commended Ukraine’s continuing contribution to international peace and security operations throughout the globe.

Rule of Law and Humanitarian Issues

Ukraine committed to further strengthen its democratic institutions, in particular by conducting free, fair, and secure 2019 presidential and parliamentary elections in accordance with international standards, and welcomed international support.

The United States commended Ukraine’s commitment to pursue further comprehensive judicial and law enforcement reform, necessary to strengthen the rule of law in Ukraine. The United States commended Ukraine for adopting a law to establish an independent anti-corruption court that encompasses recommendations of the IMF and other international partners of Ukraine. Ukraine reaffirmed its commitment to establishing a fully functioning independent High Anti-Corruption Court and to protecting anti-corruption institutions.

Both sides highlighted the need to increase civilians’ freedom of movement and improve access to government services and humanitarian assistance for Ukrainians affected by Russian aggression, including Ukrainians residing in territories temporarily controlled or occupied by Russia. The United States commended Ukraine’s efforts to provide for the needs of IDPs, though both sides concurred that more work remains. The sides emphasized that the rights of all Ukrainians must be equally guaranteed. The United States and Ukraine also discussed actions on combatting trafficking in persons.

The United States reaffirmed its commitment to partner with Ukraine to develop a free and prosperous economy. The United States expressed support for the many economic reforms Ukraine has undertaken, and encouraged further reform and cooperation with the IMF and other partners to achieve strong, sustainable, and inclusive economic growth. The United States and Ukraine underlined the importance of the work of the U.S.-Ukraine Trade and Investment Council to increase bilateral trade and investments by eliminating existing trade barriers and improving the regulatory environment and business climate.

Both sides intend to continue work together aimed at developing and reforming Ukraine’s energy sector to enhance Ukraine’s economy and security. Ukraine underscored its intention to expand domestic oil and gas production, unbundle the gas transit system, and welcomed the involvement of U.S. companies in these efforts, as well as in programs aimed at increasing energy efficiency. Both sides also underscored the need for continued gas transit through Ukraine, and emphasized their opposition to energy projects that threaten European energy diversity and security. In particular, the United States and Ukraine stressed the importance of continued coordination to stop proposed Russian pipelines that would hurt Ukraine’s economic and strategic stability, such as Nord Stream 2 and the second line of TurkStream.

Secretary Pompeo and Minister Klimkin look forward to further strengthening the partnership between the United States and Ukraine and decided to convene the next session of the Strategic Partnership Commission in Kyiv, Ukraine.

Hope you enjoyed the truth?

Wake up people….seems strange that things like this always happen after meetings such as this… Duh!