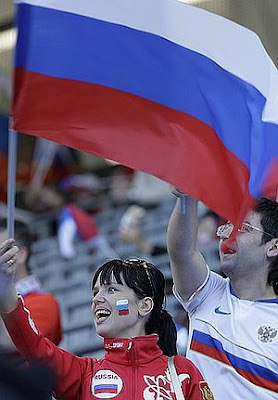 Glad they are doing this little bit of law adjustment….
————————————————–
A draft law will be introduced into the Russian State Duma today to allow Russians to use the national flag for “unofficial purposes.” The bill originated with the United Russia Party, which discovered that soccer fans are breaking the law when they wave the Russian flag in stadiums and on the street and paint their faces with the tricolor, which can be construed as its desecration. Current legislation allows for the use of the flag only in official contexts. Therefore, chairman of the Duma Committee on Constitutional Legislation Vladimir Pligin and chairman of the Committee on Civil Legislation Pavel Krasheninnikov have proposed amendments to the constitutional law “On the State Flag of the Russian Federation.” Link
————————————————–
The last few days there has been Russian flags everywhere. On the ground, on cars, being drug by cars, being worn by people & multiple of other things done to the flag.

Russians are having a blast with the national pride over Football. Glad to see that the Kremlin will not persecute the fans….. (Russia is Changing) 🙂