and we tried to bring up our children by reading them good children book. Today we are finishing a story by Nikolay Nosov “The Crucian Carp”. If you did not read the first part please click at the little picture. To the right —-> 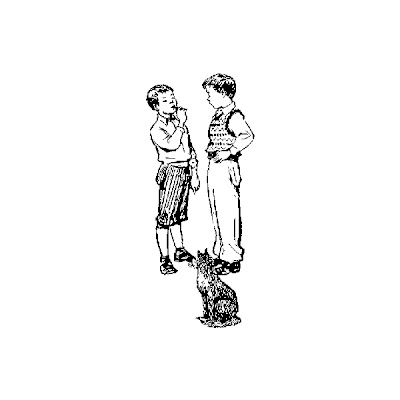 …The boys stood watching the fish swimming back and forth in the jar. Seryozha was very pleased, but Vitalik felt a little sad. He was sorry he had given away his fish, and what is most important, he was afraid to tell his mother that he had exchanged it for a whistle.

“Perhaps she won’t notice that it’s gone,” he thought as he walked home. But as soon as he came home his mother asked him: “Where is your fish?”
Vitalik did not know what to say.
“Did Murzik eat it up?”
“I don’t know,” Vitalik mumbled.

“There you are,” said his mother. “He waited until everybody was out, fished it out of the bowl and gobbled it up. Look at all the water splashed about! The wicked cat! Where is he? Find him at once.”

“Murzik! Murzik!” Vitalik called, but Murzik was nowhere to be seen.
“He must have jumped out through the window,” said his mother. “Go outside and have a look.”
Vitalik put on his coat and went outside.

“Oh dear, what shall I do?” he thought miserably. “Now Murzik will get a hiding because of me.”
He was just about to go back and say he couldn’t find Murzik, when Murzik himself sprang out of an opening that led into the basement and ran over to the door.
“Murzik darling, don’t go home,” said Vitalik. “You’ll get a hiding from Mummy.”
Murzik purred and rubbed himself against Vitalik’s leg and meowed softly.
“Don’t you understand, you silly cat?” said Vitalik. “You mustn’t go in.”
But Murzik wouldn’t listen. He looked up adoringly at Vitalik, rubbing himself against his legs and pushing at him gently with his head as if begging him to hurry up and open the door. Vitalik tried to drag him away from the door, but Murzik insisted. Vitalik opened the door quickly, slipped inside and closed it before Murzik had time to follow him.
“Meow!” cried Murzik from the other side of the door.
Vitalik poked his head out: “Keep quiet, you silly. Mummy will hear and you’ll get beaten!”
He picked up the cat and started to push him back into the hole under the house. Murzik resisted with all four paws. He didn’t want to go back into the basement.
“Get in, silly,” muttered Vitalik. “And stay there.”
At last he managed to push the kitten through the hole, all except his tail which still stuck out. The tail wiggled angrily for a little, then disappeared inside. Vitalik was glad: he thought Murzik understood that he must sit tight in the cellar. But the next minute Murzik stuck his head out of the hole again.
“Where are you going, stupid!” hissed Vitalik, covering the opening with his hands. “Didn’t I tell you you can’t go home just now.”
“Meow!” cried Murzik.
“Meow yourself,” snapped Vitalik. “Oh dear, what shall I do with you?”
He looked around for something to cover the hole with. There was a brick lying on the ground near the cellar. Vitalik picked it up and stood it up against the opening.
“There,” he said. “Now you can’t get out. You stay there for a while. Tomorrow Mummy will forget all about the fish and then I’ll let you out.”

Vitalik went back into the house and told his mother he couldn’t find Murzik anywhere.
“Never mind,” said Mummy. “He’ll come back. I shan’t forgive him for this.”
At dinner that day Vitalik felt very miserable. He didn’t want to eat anything.
“Here I am having dinner,” he thought, “and poor Murzik is sitting there in the dark cellar.”
When his mother left the table, Vitalik took his portion of meat from his plate, hid it in his pocket and ran out to the cellar. He moved the brick aside and called softly: “Murzik! Murzik!”
But Murzik didn’t answer. Vitalik bent down and peeped through the hole, but it was too dark to see anything.
“Murzik! Murzik!” Vitalik called. “Do come out, there’s a good cat. I’ve got a nice bit of meat for you.”
But Murzik did not appear.
“You won’t? All right, you can stay there hungry,” said Vitalik and went home in a huff.
At home he felt very lonely without Murzik. Besides, his heart was heavy because he had deceived his mother.
His mother saw that he looked unhappy.
“Cheer up,” she said. “I’ll get you another fish.”
“I don’t want a fish,” he said.
He wanted to own up to his mother about everything but he hadn’t the courage, so he said nothing. Just then there was a faint scratching noise outside the window, followed by loud “Meow!”
Vitalik looked up and saw Murzik standing on the window-ledge. How had he got out of the cellar?

“Aha!” cried Vitalik’s mother. “There he is, the rascal! Come here, you bad cat!”
She opened the little window and Murzik came in. She tried to grab him, but he must have guessed that something was wrong because he darted under the table.
“Oh, the cunning little beast,” said Vitalik’s mother. “He knows he’s guilty. Vitalik, help me catch him.”
Vitalik crawled under the table. When Murzik saw him he fled for cover under the sofa. Vitalik was glad, and though he dutifully crawled after him, he made as much noise as he could so as to give Murzik a chance to escape. Murzik sprang out from under the sofa and Vitalik started chasing him round and round the room.
“Don’t make such a noise,” said his mother. “You’ll never catch him that way.”
Murzik jumped on to the window-sill where the empty fish bowl stood and was about to jump back through the window but missed his footing and fell into the fish bowl with a great splash! The next moment he was out, shaking himself furiously. Mother seized him by the scruff of the neck.

“Now, I’ll teach you a good lesson.”
“Mummy, Mummy! Please don’t beat him!” cried Vitalik and burst into tears.
“Now, don’t go pitying him. He didn’t pity the fish, did he?”
“He isn’t to blame, Mummy.”
“Oh, isn’t he? Who ate the fish, then?”
“It wasn’t him.”
“Then who was it?”
“It was me….”
“What? You ate the fish?”
“No, I didn’t eat it. I … I exchanged it for a whistle.”
“For a what?”
“For this.” And Vitalik pulled the whistle out of his pocket and showed it to his mother.
“You naughty boy, you ought to be ashamed of yourself.”
“I didn’t mean it, Mummy. Seryozha said: ‘Let’s change,’ so I did.”
“I meant you ought to be ashamed of yourself for not telling the truth. I blamed it on Murzik. Is it nice to shift the blame on others?”
“I was afraid you would scold me.”
“Only cowards are afraid to tell the truth. How would you have felt if I had punished Murzik?”
“I’ll never do it again.”
“Well, mind you don’t. I forgive you this time because you owned up.”

Vitalik picked up Murzik and took him over to the stove to dry. With his wet fur sticking up all over Murzik looked more like a hedgehog than a cat. He looked skinny too, as if he hadn’t eaten for a whole week. Vitalik felt very sorry for him. He took the piece of meat out of his pocket and laid it on the chair in front of Murzik. Murzik ate it up with great zest and settled down on the chair to dry. After a while he climbed on to Vitalik’s lap, curled up in a ball and began to purr as loudly as he could. The sound of his purring made Vitalik somehow feel very happy. It must have been the purring because what else could it be?

Best wishes and next Wednesday we will read next story!