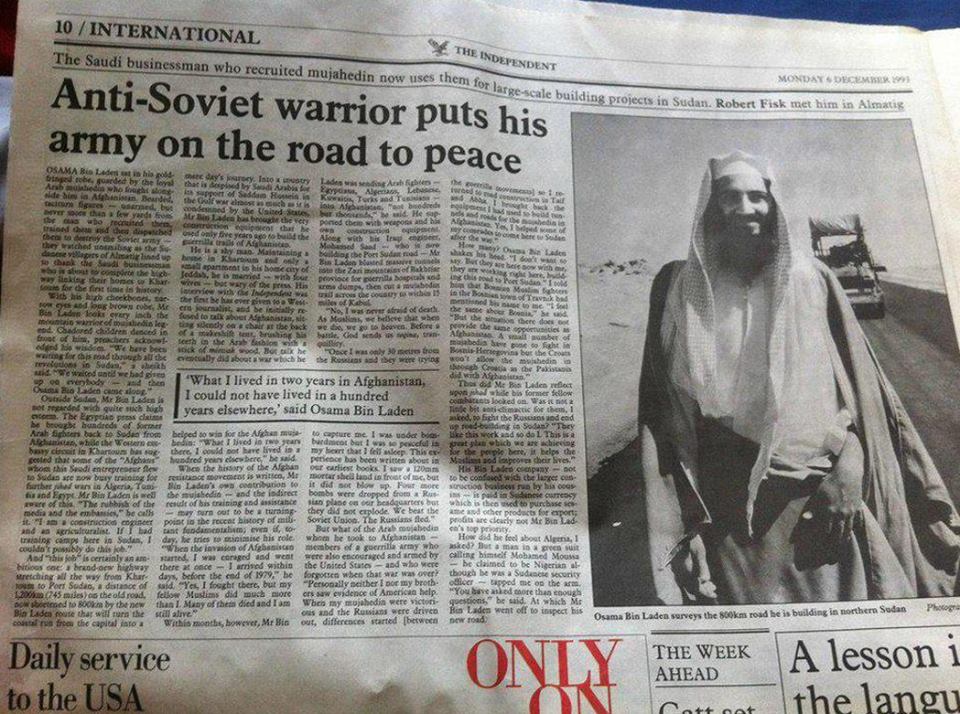 This is a perfect example of how the western world plays games and this game became the bases for several wars, lots of spent wasted money and many years and many deaths…

So welcome to Osama Bin Laden and how we relished his place in the world and even praised him for his abilities. Why we loved him enough to put him in the national media of the world. With plenty of compliments and praises…

Anti-Soviet warrior puts his army on the road to peace:

The Saudi businessman who recruited mujahedin now uses them for large-scale building projects in Sudan. Robert Fisk met him in Almatig – by ROBERT FISK

OSAMA Bin Laden sat in his gold- fringed robe, guarded by the loyal Arab mujahedin who fought alongside him in Afghanistan. Bearded, taciturn figures – unarmed, but never more than a few yards from the man who recruited them, trained them and then dispatched them to destroy the Soviet army – they watched unsmiling as the Sudanese villagers of Almatig lined up to thank the Saudi businessman who is about to complete the highway linking their homes to Khartoum for the first time in history.

With his high cheekbones, narrow eyes and long brown robe, Mr Bin Laden looks every inch the mountain warrior of mujahedin legend. Chadored children danced in front of him, preachers acknowledged his wisdom. ‘We have been waiting for this road through all the revolutions in Sudan,’ a sheikh said. ‘We waited until we had given up on everybody – and then Osama Bin Laden came along.’

Outside Sudan, Mr Bin Laden is not regarded with quite such high esteem. The Egyptian press claims he brought hundreds of former Arab fighters back to Sudan from Afghanistan, while the Western embassy circuit in Khartoum has suggested that some of the ‘Afghans’ whom this Saudi entrepreneur flew to Sudan are now busy training for further jihad wars in Algeria, Tunisia and Egypt. Mr Bin Laden is well aware of this. ‘The rubbish of the media and the embassies,’ he calls it. ‘I am a construction engineer and an agriculturalist. If I had training camps here in Sudan, I couldn’t possibly do this job.’

And ‘this job’ is certainly an ambitious one: a brand-new highway stretching all the way from Khartoum to Port Sudan, a distance of 1,200km (745 miles) on the old road, now shortened to 800km by the new Bin Laden route that will turn the coastal run from the capital into a mere day’s journey. Into a country that is despised by Saudi Arabia for its support of Saddam Hussein in the Gulf war almost as much as it is condemned by the United States, Mr Bin Laden has brought the very construction equipment that he used only five years ago to build the guerrilla trails of Afghanistan.

“What I lived in two years in Afghanistan,
I could not have lived in a hundred years elsewhere!”
said Osama Bin Laden…

He is a shy man. Maintaining a home in Khartoum and only a small apartment in his home city of Jeddah, he is married – with four wives – but wary of the press. His interview with the Independent was the first he has ever given to a Western journalist, and he initially refused to talk about Afghanistan, sitting silently on a chair at the back of a makeshift tent, brushing his teeth in the Arab fashion with a stick of miswak wood. But talk he eventually did about a war which he helped to win for the Afghan mujahedin: ‘What I lived in two years there, I could not have lived in a hundred years elsewhere,’ he said.

When the history of the Afghan resistance movement is written, Mr Bin Laden’s own contribution to the mujahedin – and the indirect result of his training and assistance – may turn out to be a turning- point in the recent history of militant fundamentalism; even if, today, he tries to minimize his role. ‘When the invasion of Afghanistan started, I was enraged and went there at once – I arrived within days, before the end of 1979,’ he said. ‘Yes, I fought there, but my fellow Muslims did much more than I. Many of them died and I am still alive.’

Within months, however, Mr Bin Laden was sending Arab fighters – Egyptians, Algerians, Lebanese, Kuwaitis, Turks and Tunisians – into Afghanistan; ‘not hundreds but thousands,’ he said. He supported them with weapons and his own construction equipment. Along with his Iraqi engineer, Mohamed Saad – who is now building the Port Sudan road – Mr Bin Laden blasted massive tunnels into the Zazi mountains of Bakhtiar province for guerrilla hospitals and arms dumps, then cut a mujahedin trail across the country to within 15 miles of Kabul.

‘No, I was never afraid of death. As Muslims, we believe that when we die, we go to heaven. Before a battle, God sends us seqina, tranquility.

‘Once I was only 30 meters from the Russians and they were trying to capture me. I was under bombardment but I was so peaceful in my heart that I fell asleep. This experience has been written about in our earliest books. I saw a 120mm mortar shell land in front of me, but it did not blow up. Four more bombs were dropped from a Russian plane on our headquarters but they did not explode. We beat the Soviet Union. The Russians fled.’

But what of the Arab mujahedin whom he took to Afghanistan – members of a guerrilla army who were also encouraged and armed by the United States – and who were forgotten when that war was over? ‘Personally neither I nor my brothers saw evidence of American help. When my mujahedin were victorious and the Russians were driven out, differences started (between the guerrilla movements) so I returned to road construction in Taif and Abha. I brought back the equipment I had used to build tunnels and roads for the mujahedin in Afghanistan. Yes, I helped some of my comrades to come here to Sudan after the war.’

How many? Osama Bin Laden shakes his head. ‘I don’t want to say. But they are here now with me, they are working right here, building this road to Port Sudan.’ I told him that Bosnian Muslim fighters in the Bosnian town of Travnik had mentioned his name to me. ‘I feel the same about Bosnia,’ he said. ‘But the situation there does not provide the same opportunities as Afghanistan. A small number of mujahedin have gone to fight in Bosnia-Herzegovina but the Croats won’t allow the mujahedin in through Croatia as the Pakistanis did with Afghanistan.’

Thus did Mr Bin Laden reflect upon jihad while his former fellow combatants looked on. Was it not a little bit anti-climactic for them, I asked, to fight the Russians and end up road-building in Sudan? ‘They like this work and so do I. This is a great plan which we are achieving for the people here, it helps the Muslims and improves their lives.’

His Bin Laden company – not to be confused with the larger construction business run by his cousins – is paid in Sudanese currency which is then used to purchase sesame and other products for export; profits are clearly not Mr Bin Laden’s top priority.

How did he feel about Algeria, I asked? But a man in a green suit calling himself Mohamed Moussa – he claimed to be Nigerian although he was a Sudanese security officer – tapped me on the arm. ‘You have asked more than enough questions,’ he said. At which Mr Bin Laden went off to inspect his new road.