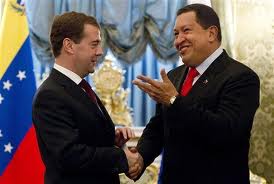 Russian President Dmitry Medvedev and his Venezuelan counterpart Hugo Chavez on Thursday called for an end to the ongoing bloodshed in Libya and the start of political dialogue, the Kremlin said.

The two leaders, who discussed the situation in the North African country by telephone, stressed the need for all parties concerned “to act strictly in accordance with UN Security Council resolutions,” the Kremlin said.

“Priority at this stage should, without doubt, be given to ensuring the security of civilians,” they said, according to the Kremlin statement.