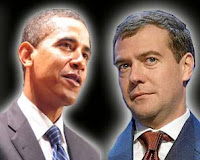 Mr Obama expressed his sincere condolences concerning the act of terrorism in Russia which resulted in a train derailment and caused many casualties.

Dmitry Medvedev and Barack Obama touched on further cooperation between Russia and the United States in order to stabilize the situation in Afghanistan and discussed the preparation of a new treaty on strategic offensive weapons.

The conversation was initiated by the American party.