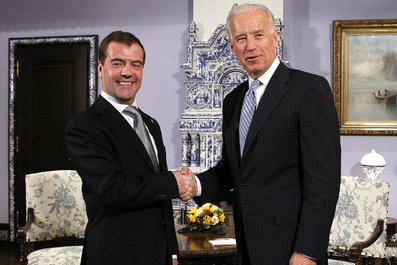 PRESIDENT OF RUSSIA DMITRY MEDVEDEV:
Mr Vice President, I am happy to be meeting with you again. Last year, we were able to make a lot of progress in the relations between the United States of America and the Russian Federation. This past year was successful, including the ratification of the new START treaty, which was a significant event for all of us. I think that the President and I did some good work and I would like to say that your participation in this process was also quite successful. For that, I want to thank you.

I am certain that this will benefit our nations, and therefore, the overall security on our planet. But at the same time, we have bilateral issues that are also very important for our states. And that is the context in which I view your visit to our nation. I think that our economic relations lag significantly behind our political relations. In this sense, of course, the issue is also hampered by Russia’s lack of membership in the World Trade Organization. I hope that this year, the processes will be completed, particularly with the United States’ active support.

We have major economic projects that we must develop jointly. I am very happy that you have just visited Skolkovo. It is an example of good cooperation in the high-tech sector and the creation of new types of businesses, which is particularly important for our nations, perhaps especially so during a time when the economies of both our nations are overcoming the financial crisis.

I think you’ve had talks on economic issues today, and will continue to do so tomorrow. But naturally, there are issues that nevertheless remain exceedingly important for our nations: I am referring to ensuring security. Recently, we have had a whole series of important events in this area.

Last year, during the Russia-NATO summit, I proposed a joint configuration for our work on anti-missile defense, as well as generally looking into this matter in the European security context. There are problems that have occurred this year; I feel that they must also have a place on our joint agenda – including the problems and challenges that are currently concentrated in the Middle East and North Africa. There is a whole set of other international problems on which we are cooperating well with the United States of America. I am certain that this kind of cooperation will continue.

Thus, I hope that your visit will be successful and productive. We are ready to develop full-fledged, full-scale, strategic relations with the United States, and you know this. And especially as your last visit to our nation was a long time ago. I hope that your current visit will give you new impressions. In any event, we will create all the conditions for this. I would like you to pass my best wishes on to my colleague, President Obama.

VICE PRESIDENT OF THE UNITED STATES JOSEPH BIDEN: Mr President, President Obama sends his regards as well. As you know, he has sought your counsel and advice and met with you more than any other head of state by probably a factor of three.

It’s very good to be back in Russia. I am both a student of and a respecter of the great traditions of a great power. The first Russian leader I met with was Brezhnev. That’s how old I am. To further age myself, I knew both Jackson and Vanik. I think that’s why President Obama keeps me around.

But Mr President, as you know, when President Obama and I were elected, the first matter of business internationally we thought we should attend to and change the direction of was US-Russian relations. For years before, as the chairman of our Senate Foreign Relations Committee, I, along with President Obama, thought that the relationship was drifting in the wrong direction prior to us coming to office. The first foreign policy pronouncement our administration made was the speech I made in Munich at the request of President Obama, where we used the phrase that it was time to push the reset button, reset our relationship with Russia. Because of your personal leadership and your colleagues, I think we’ve proved the skeptics wrong. We have made great progress in the last two years – not only on the new START treaty, but on matters relating to Korea, Iran, matters related to Afghanistan, a whole range of areas where there has been cooperation and Russian leadership.

As you pointed out, I just came from meeting with Russian and American business leaders, on a beautiful new campus which, hopefully, will become the Silicon Valley of Russia. The reason I’m here is because the President wants me to make it clear we wish to continue the progress we’ve made, this time on the economic front – economic cooperation – your vision for Russia of innovation and change and modernization, and we’d like very much to be a part of that.

A fundamental change has taken place between my first visit in the seventies and today as we no longer and you no longer view our mutual success as a zero-sum game. We both benefit when the other succeeds. I consider it a success when I attend a meeting and I learn something that I hadn’t thought of or knew before the meeting. That happened in my meeting today with Russian business leaders. One of the Russian CEOs said, ‘You seem to demand more of us, and expect more of us, Russia, than you do of China or India.’ And he suggested that may be a legacy from the Cold War. And I thought about that. I don’t think it’s because of the Cold War. I think it’s because we have such high expectations – and I mean this seriously – we have such high expectations and such respect for Russia. For my entire career, when I sat with a Russian leader, I was sitting with one of the most powerful men in the world, and that’s how we still think of you. I mean that sincerely. So it may be, sometimes, we do expect too much progress too quickly. But the expectation is born out of admiration and respect, not out of disrespect.

DMITRY MEDVEDEV: Mr Vice President, thank you for your words. I would just like to express hope that the next time you come to our nation – which I hope will happen soon – at least one of the topics you’ve mentioned will be left in the past. I am referring to the Jackson-Vanik amendment, because this is an issue that always comes up during your visits. I hope that this will be the last time. After all, you cannot keep dealing with it throughout your entire career.

JOSEPH BIDEN: I hope not, Mr President. We strongly support the repeal of Jackson-Vanik and we will work to eliminate it. As you know, we are working in Geneva, not just with you but the international community, to push for Russian accession. We are not being passive in this effort.