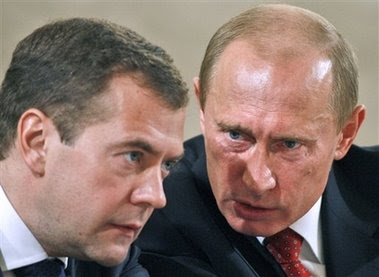 MOSCOW | On Wednesday, Dmitry Medvedev will walk through three gilded halls in the Grand Kremlin Palace to a rostrum where he will be sworn in as Russia’s third president, his right hand on a copy of the Russian constitution. To the strains of the national anthem, the presidential flag will be raised over the presidential residence. Medvedev will address the audience and the nation before a 30-gun salute signals the end of the ceremony and the arrival of a new leader inside the forbidding walls of the Kremlin.

The following day, with much less ceremony and more dispatch, his popular and powerful predecessor, Vladimir Putin, will almost certainly become Russia’s new prime minister. Putin will move upriver from the Kremlin to Russia’s White House, home to prime ministers, who traditionally have functioned as political errand boys for the president.

The new president and parliament will skip the traditional consultations over the choice of prime minister. “Why put it off?” asked Boris Gryzlov, speaker of the lower house of parliament. “We know whom the president will nominate.”

Since the moment last year when Putin announced his willingness to become prime minister, Russia has been gripped by questions: Who will rule Russia? Why is Putin assuming a seemingly subordinate role to Medvedev? And how long will this tango last?

“If we try to answer our favorite question — Who’s in charge?’ — we are at a loss,” said Lilia Shevtsova of the Moscow Carnegie Center. “We simply don’t know.”

Neither Putin nor Medvedev has publicly discussed the division of powers in any detail except to say they are in complete harmony about the country’s direction. The two men, who have worked together for nearly two decades, with Putin as boss, have a close personal relationship. But Russian history shows that the man in the Kremlin almost always begins to savor and exercise his authority.

Medvedev, 42,is assuming an office that according to the Russian constitution is the most powerful in the land, carrying the right to dismiss the prime minister. Under Putin, the presidential administration became the country’s unchallenged center of power, dominating parliament and the courts, reining in the media, and making leaders in the country’s sprawling regions subject to appointment by Moscow.

“Presidential power guarantees unity and the very existence of Russia,” Alexander Budberg, who is close to Medvedev, wrote this month in an essay in the newspaper Moskovsky Komsomolets. “The entire country and the bureaucratic class, seized with pride, must get used to the fact: There will be a president in Russia, and not an empty throne which has been put in storage’ for four years.”

But Putin, 55, leaves office with enormous political capital and new institutional prerogatives that at the very least will make him the most powerful prime minister the country has ever seen. Since Medvedev was elected, Putin has also been named chairman of the dominant United Russia party, beginning Thursday. The party rewrote its rules to allow its new chairman to dismiss any functionary and suspend any party activity.

“That was a clear message to the elite: I’m not dead yet,’ ” Shevtsova said.

Putin did not, however, become a member of the party he will now chair; he appears to want to direct the party but remain above it, a kind of moral leader in the eyes of Russians.

Through the party, Putin will control both houses of parliament, which can impeach the president and regional governors. He will also be master of Russia’s vast bureaucracy and state-controlled companies whose ranks are full of his loyalists.

What remains uncertain is how Putin intends to exercise this power, and to what end. Is he simply biding his time before returning to the Kremlin as president, consolidating his new position so as to rule out the unlikely possibility that Medvedev might warm to the presidency and turn against him? Or has he been careful to maintain so much power in order to protect Medvedev while the neophyte president establishes his own base in a system that would devour him without Putin’s oversight? Or is there no grand strategy, and the two men, while agreeing to share power, have not looked beyond the horizon?

Olga Kryshtanovskaya, director of the Moscow-based Center for the Study of Elites, is certain of one thing. “I’m absolutely sure that Putin is coming back” as president, she said. “Whether that happens in two or four years, I don’t know. But he will be coming back for 14 years, two new seven-year terms.”

Kryshtanovskaya points to calls by political figures such as Gryzlov for parliamentary and presidential elections to be held two years apart rather than close together, as they are now. Splitting the polls that way could trigger a new presidential election in 2010. United Russia leaders have also spoken of extending the presidential term to seven years.

Such amendments to the electoral law could see Putin back in the Kremlin until 2024. Nor has Putin ruled out a return to the Kremlin; indeed, he has publicly flirted with the idea on occasion.

“I think Medvedev is a willing participant in all of this,” Kryshtanovskaya said. “Of course, there is a very small chance that Medvedev might betray him and become a real president, and some of Putin’s moves recently are to protect himself from that.”

But Sergey Markov, a United Russia lawmaker and political analyst, said that if Medvedev proves up to the job and broadly follows the policies set by Putin, then the former president will leave the stage in a year or two.

“Putin is Medvedev’s political father,” Markov said. “If Medvedev is successful, Putin will step aside. He wants to give the chance to someone else. He will not become a simple pensioner, but he is not obsessed with keeping power. Of course, if Medvedev fails, he can return.”
————————————————–
I find it interesting that people try to second guess what will happen.

I will tell you what will happen, Medvedev will be sworn in as President. Putin will be made the Prime Minister of Russia. Then behind closed doors the two men will run Russia as they see necessary!

Now we have two men, who have worked together for nearly two decades, with Putin always as the leader and have a close personal relationship. The plans that are in effect have been in effect for years.

Now Putin has twice as much power……

I hope he uses it wisely!