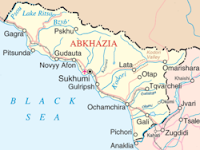 According to RIA Novosti news agency:

Merab Kishmaria said should a military operation begin, some 3,000 troops will apparently be used to seize the Kodori Gorge, in the northeast of Abkhazia.

“We are watching the movement of troops in the Kodori Gorge. According to our intelligence, up to 7,500 Georgian troops on the Georgian-Abkhaz border are on alert, with 3,000 of them to be used in attempting to take the Kodori Gorge,” he said.

He added that the Abkhaz armed forces had also been put on combat alert and that there would be enough forces and military equipment to repulse any “Georgian aggression.”
———————————————————-

I do not think that Abkhaz will be a push over & Georgia better watch their P&Q’s.

Besides this is not far from Sochi, someone better get it under control before the Olympics…..