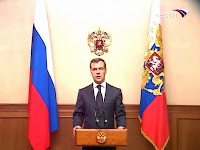 Excerpts from Conversation with Residents of South Ossetia:

PRESIDENT OF RUSSIA DMITRY MEDVEDEV: My greetings to you all once again.

Thank you for coming to say kind words to our soldiers. I already made some comments, expressed my thoughts on what happened, on what we did in response, on what we should have done and what we had no choice but to do.

There will always be different views of what happened of course. It is your view of events that matters most to us, rather than the assessments of foreign political analysts who do not even know where South Ossetia is on the map, and the assessments of specialists who have spent their lives studying the Soviet Union and Russia, but have no idea how life is actually organized in our countries and how our peoples lived and live. For us, for Russia’s people and leadership, it is your view of events, your assessment that matters most of all.

When I came to you the first time, I saw, of course, the signs of destruction, the scars left by the blockade that lasted such a long time.

DMITRY MEDVEDEV: Twenty years. You can still see the wounds this land bears. But the emotional dimension makes up for everything, because people are genuinely happy that in this very difficult situation that lasted decades they have managed to survive.

The Russian people, our soldiers, have played a direct part in ensuring this survival, and this is something you cannot fail to feel. Talking with you, I hear from you such positive and kind words, see such good feeling, and it was exactly the same in the city. Just ordinary people, and there’s no need to prove anything to them, no need for long speeches, they simply came to say “thank you” and give us a hug.

I want to say how extremely important this is to me not just as Russia’s president, but as an ordinary person, because everything we did, we did it for you. We acted not in pursuit of geopolitical aims and victories – this is all worthless. What counts above all is human life.

You are right when you say that all the problems here cannot be put right in the space of just a year, all the more so as they have built up over decades. But at the same time, we need to keep our sights on the future. The first time I came, I saw that many streets and buildings were in a sorry state. There is no question that they must be rebuilt and repaired.

But we are seeing signs of new life starting to emerge, and these signs are essential. These new buildings under construction, the new schools being built – they were not here before. This work needs to become a permanent part of life. It won’t be possible to rebuild everyone’s houses and repair all the streets all at once, but things have to be moving forward, and it seems to me that this is the case today.

I wish all of you here success in this work, because the country’s future depends on you and on your desire to build a modern, compact and flourishing state.

Russia will certainly help you in every way it can. We will give you economic and social support, and we will also assist you in military matters, of course, because you would face big problems without military support.

We have signed treaties and concluded agreements. You can be assured of our support, but the inner motivation to create a small and yet prosperous country has to come above all from you yourselves. If you have this determination, South Ossetia will become the country that you want it to be.

On the subject of recognition, this was not an easy decision for Russia and for myself as president, as I am sure you know. But for some reason, some of our partners in the international community still hold out vain hopes that these are somehow only temporary steps taken in response to particular political circumstances, and that it might be possible to pressure Russia into going back on its decisions.

Speaking in the street, at the award ceremony, I said that these kinds of decisions are made once and for good, and I repeat these words now. There will be no going back on our decisions. We have made our choice. We took our stand last August, and the only direction now is forward.

Of course, for the decision makers, for country’s president, it is essential to know the ordinary people’s view on an issue. This is what counts more than anything else. You rightly noted the unanimity, the fact that people really spoke with one voice against the aggression that took place and the losses it caused, and united in support of our subsequent decisions, and this is the main yardstick of justice for our country’s leadership and people.

In situations like this there cannot be divergence between the leadership’s decisions and what the public wants. If the leadership and people are united they produce strong decisions. You were right in citing the examples of the most dramatic events of the twentieth century, because only in such situations can difficult decisions of this kind be taken.