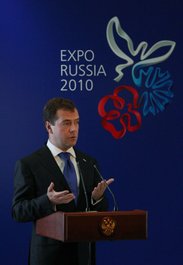 QUESTION: Mr President, based on the outcome of your visit do you think China, along with the United States and the European Union, will be able to take part in Russia’s modernization by perhaps becoming involved in specific projects in the Skolkovo Innovation Center, for example? And in general, on the basis of what we saw over the past three days in Dalian, Beijing and Shanghai, what do you think Russia can and wants to learn from China?

PRESIDENT OF RUSSIA DMITRY MEDVEDEV: You know, I believe that China not only can take part in the modernization of our economy but, in fact, is already taking part, because there is a number of quite interesting and modern high-tech projects that we have been implementing jointly with our Chinese partners.

We saw one of such projects as we walked around our pavilion. This project focuses on the manufacture of accumulators for buses. It is very interesting. If I am not mistaken, such an accumulator will suffice for a bus to travel 400 kilometers. This is a simple example but it is absolutely obvious.

As for bigger and more serious projects, I discussed this subject with President of China Mr Hu Jintao, and I proposed to him this kind of cooperation in Russia. President Hu found this interesting and said that Chinese experts and organizations are willing to participate in the creation of Skolkovo, and are ready to consider a variety of ways in which they can take part in our new innovation center. So this topic has been discussed directly with our Chinese friends. And I’m certain that there are very good prospects in this area, just as good as the prospects we have in Europe and the United States. We are interested in all partners, and all partners are important to us.

As for the outcome of this visit, I think it is very positive. Of course, the visit was very fast: three cities in three days. On the other hand, is has been a very interesting and very concentrated program. I was just thinking of how to explain this, maybe in a Chinese style.

Dalian symbolises the history of our relations, it is the past, and, of course, the future too because we met with students at the university there, but nevertheless it is our history.

Beijing represents the present, with extensive talks in restricted and in expanded format, with the participation of the top officials of the People’s Republic of China; talks held in a friendly atmosphere, very specific and detailed negotiations, plus the signing of a significant number of documents. You know this already, I saw this discussed in the media today: overall, the outcome is regarded as a clear success. We have made some breakthroughs.

Incidentally, I told Vice President Xi Jinping today, as well as President Hu Jintao yesterday that we view our relations with China as strategic and focused on the future.

And we certainly saw the future here in Shanghai. First of all, Shanghai itself is an interesting and beautiful city, which has changed a great deal in the past nine years. Back then it was already a modern city, although it has a historical center, but even then I found a lot of things amazing. Now everything is really very interesting and beautiful, and our pavilion and participation in 2010 World Expo is, in fact, the future, the future of our cities, the future of our industry, but most importantly, it is the future of our children. In this regard, our pavilion symbolizes a vision of the future. And personally I thought it was very interesting that various high technologies were explained in a way that was easy for children to understand, in Russian and Chinese. That is why 6 million people have already visited our pavilion, out of the 60 million people who have visited the Expo. That is one tenth, if you think about it, of the people and children who came over, and I think that’s not bad. So the future is today.

Therefore, three cities – three stories, as they say, and each one has its own value and its own dimension.

I am fully satisfied with the outcome of the visit to the People’s Republic of China. I hope that this visit will symbolize a new chapter in the history of our relations.

QUESTION: Mr President, at the last meeting on law enforcement, you mentioned executive orders which will reform the Interior Ministry. Could you please say how it will be reformed? Will the changes affect the ministry’s top officials? And could you comment please on your decision regarding the Investigative Committee. Will a new unified Investigative Committee be created?

DMITRY MEDVEDEV: When I came into office, I said that I will focus on the legal system and law enforcement, and that is what I have been doing. At any rate, very serious decisions are being made. Perhaps the progress has not been as rapid as I had wished and the results are not as all of us had expected, but in any case a journey of a thousand miles begins with a single step, so we must do something rather than just talk about how impossible it is to reform our law enforcement system and how it would be easier to start from scratch and make some tough decisions. We must act, we must change, but these changes must reflect our current reality.

That is why I proposed to reform the Interior Ministry. We are about to adopt the Law On the Police Force, which will change the functions of the police, set new objectives and grant new rights. This law was debated for a long time, and, in my view, quite successfully. Again, some thought these changes sufficient and others did not. But in any case, this law, when adopted, and I hope this will happen in the near future, this law will not be set in stone, and if necessary we will make amendments to it. Most importantly, it is a new step in the development of our law enforcement system and the police.

Regarding the structure of the Interior Ministry, this issue is determined by a Presidential Executive Order. I am currently discussing it with the leadership of the Interior Ministry, with the Presidential Executive Office and with other persons involved. I believe that this organization should be modern, fairly compact, rational and consistent with the Law On the Police Force. I think this structure will be approved in a relatively short time.

I would like the reform process to be peaceful, and to make sure the investigative system works without fail or hindrance. That is why the final configuration has not been defined as yet. In principle, I suppose it is possible that at some point the Investigative Committee may assume full jurisdiction of other investigative agencies. But if we do it, we must be aware of the consequences. The main thing is that it is acceptable for the law enforcement system, contributes to the effective investigation of cases and does not create any unresolvable contradictions in the work of investigators themselves, because now they have a different status, there are different bodies, and we must create equal working conditions. It is a long process but in principle I think such a scenario is possible.

QUESTION: Mr President, could you please comment on today’s executive order relieving Yuri Luzhkov of his duties as Moscow Mayor, written with the wording that you rarely use in your work.

DMITRY MEDVEDEV: Not relieving but dismissing, because dismissal means termination. And the wording is not just rare, it is used for the first time.

There is not much I can say to comment on the executive order because the reason is stated in the executive order itself. The reason is that I, as President of the Russian Federation, have lost confidence in Mr Luzhkov as the Mayor of Moscow. The existing law, which was adopted several years ago, directly states “loss of confidence” as grounds for termination, or in the terminology of the law “dismissal from office”. It is difficult to imagine a situation where the President and a Governor work together in an environment where the President, the highest official in Russia, does not have confidence in an official, a regional leader, which is, in fact, what has happened. This is the first time it has happened but I cannot exclude the possibility that it will happen again. It depends on each particular situation.

QUESTION: Do you already have certain candidates in mind?

DMITRY MEDVEDEV: The Executive Order I signed appointed Vladimir Resin Acting Mayor of Moscow. He is an experienced man, familiar with the situation and with the team. I am certain that he is capable of maintaining a normal effective working mode until, in accordance with the law, candidates will be selected and submitted to me as President. I will then decide who will become the leader of Moscow and submit the candidacy to Parliament.

QUESTION: The presidential election in Belarus is approaching. We are aware of a number of candidates for the post. What do you expect from this election?

DMITRY MEDVEDEV: Nothing good. I’m only joking, of course. I am sure that the Belarusian people will make their choice, because it is an internal affair of Belarus. And I hope that this choice will be implemented in compliance with the existing legislation and with respect for human rights and fundamental interests of the citizens of Belarus. We are not indifferent about the fate of Belarus and Belarusian people.