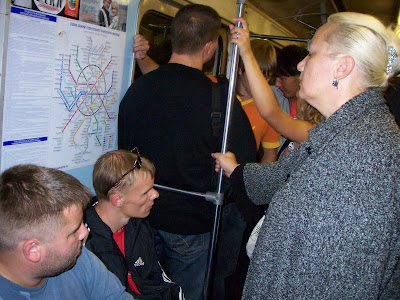 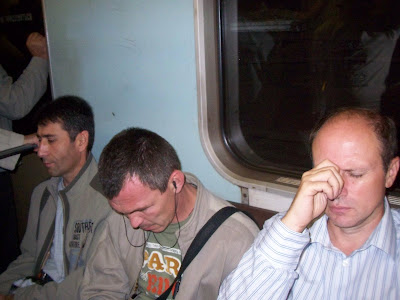 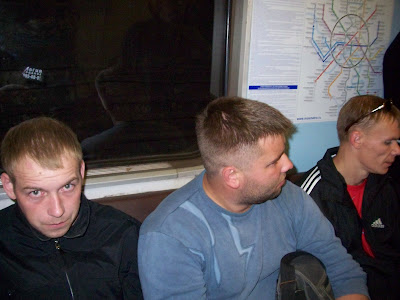 (If you want to see pictures of Russian Metro – most beautiful subway system in the world, please, look at this article!)

I was drinking my morning cup of coffee and was thinking about that my wife came home a little upset yesterday. Now Svet just does not get upset at the world, she is very calm and peaceful. So when she says that she saw something that upset her and she took pictures! I listened, (yes I actually listen).

So to help understand, lets look at the pictures first.
1st picture: Elder Babushka having to stand on metro.
2nd picture: First 3 of the 6 much younger men sitting and not offering their seat.
3rd picture: Second 3 of the 6 younger men in the same row.

As you can see they are trying to hide their faces and look the other way. Svet got a little bit peeved at this display of inconsideration.

In Russia, The children and elderly are to be given seats. The men and younger women should stand when possible. My wife says that she is a younger woman, so she will stand most times when Metro is crowded.

These men know that they should get up, but they really do not care! That is what upset my wife.

I thought about this this morning and decided to post an article about it.

I think that on public transport that men, if able should give their seat to older women (babushkas), children, Mothers and anyone else that seems to have problems standing. I was raised to be polite and considerate.

What makes this even more important is that young women in Russia will get up and give their seat to elderly and children much more than men.(That makes us men look really bad)