My words came true and now the US has put Sassy (Saakashvili) to work, shaping young/old minds into a brainless mass of mush. Sassy disappeared from Georgia (Smart move on his part, since his mouth would have him hung!), then appeared months later in the US. He has been given his payoff job for a job done, if not really well done. He did what he was told and he paid homage to his mentors and now he resides in the USA, as he teaches susceptible minds as they learn about International affairs. If that is not a sure (By Golly Gee Wiz) sign of how messed up the US is, then I guess nothing short of the US government sticking a A-Bomb directly up your ass will make any difference… 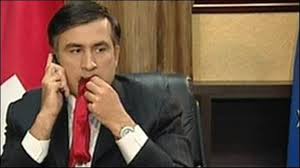 Medford/Somerville, MA—The Honorable Mikheil Saakashvili, former president of the Republic of Georgia (2004 – 2013) and founder of Georgia’s United National Movement Party, will join The Fletcher School of Law and Diplomacy at Tufts University as Senior Statesman beginning in January for the Spring 2014 academic term. In this role, President Saakashvili will conduct major addresses and lectures on European governance and other contemporary international and regional issues.

“We welcome President Saakashvili, the leader of ‘The Rose Revolution,’ to the Fletcher and Tufts community,” said Admiral James Stavridis, dean of The Fletcher School. “He is an accomplished leader and statesman, renowned for changing the course of his country’s history and moving it strongly into the trans-Atlantic community, as well as for his impact on the region and indeed the world.”

In 2005, Saakashvili was nominated for the Nobel Peace Prize by U.S. Senators Hillary Clinton (D-N.Y.) and John McCain (R-Ariz.). The two praised his “extraordinary commitment to peace … to the universal values of democracy, individual liberty and civil rights.” They added that, “because of [Saakashvili’s] efforts, the people of Georgia are now constructing new societies based on the rule of law [and] … resolving peacefully the complex ethnic and social issues that have in the past threatened to divide their nations.”

Saakashvili began his career in Georgian politics in 1995 as an elected member of Parliament. In 2000, he was appointed Minister of Justice of Georgia, where he focused on investigating and exposing government corruption and instituting judicial reforms.

A lawyer by training, Saakashvili graduated with honors from the prestigious Kiev University Institute of International Relations and received his master of laws from Columbia University. He studied law at the doctoral level at the George Washington University National Center of Law in Washington, D.C. In 1995, he became the first former Soviet citizen to obtain a diploma in Comparative Law of Human Rights from The International Institute of Human Rights in Strasbourg, France.

“I am very honored to be working with The Fletcher School of Law and Diplomacy, one of the greatest institutions specialized in these fields in the world,” said Saakashvili. “I am back to my roots as my educational background has everything to do with law and diplomacy. I will also get a chance to share the practical experience I acquired throughout the last several years.”

About The Fletcher School at Tufts University

The Fletcher School of Law and Diplomacy at Tufts University (The Fletcher School)—now celebrating its 80th year—is the first exclusively graduate school of international affairs in the United States. Since 1933, the School has prepared the world’s leaders to tackle complex global challenges through a collaborative, flexible and interdisciplinary approach to the study of international affairs. Its alumni represent the highest levels of leadership in the world, including hundreds of sitting ambassadors; respected voices from distinguished media outlets; heads of global non-profit organizations; leaders of international peacekeeping and security initiatives; and executive leadership of some of the world’s largest for-profit companies.

Blessed are those mold-able minds as they are given information to assimilate by one of the most screwed up persons (Sassy) on the planet earth. It makes me all warm and fuzzy inside knowing that out future generations of leaders will be helped to oblivion by non other than: Mikheil Saakashvili the ex-pathetic president of the Americanism of Georgia, Georgia as country not state! Oh My!

Now that is Merry Christmas in your face…