The Armed Forces of the Russian Federation continue the special military operation.

◽ In Kupyansk direction, an attack by a motorised infantry battalion of the Armed Forces of Ukraine, reinforced with tanks, was foiled by actions of Russian troops and artillery fire in the direction of Kuzemovka of (Lugansk People’s Republic).

◽During the day, in Kupyansk direction, the Armed Forces of Ukraine lost more than 160 Ukrainian personnel killed and injured, as well as two tanks, three infantry fighting vehicles, and two automobiles.

◽In Krasny Liman direction, an assault effort by two battalion tactical units of the Armed Forces of Ukraine of Ploshchanka and Chervonopopovka (Lugansk People’s Republic) was thwarted as a consequence of preparatory fire damage.

◽In South Donetsk direction, the enemy undertook two unsuccessful counterattacks in the direction of Novomikhailovka and Pavlovka (Donetsk People’s Republic) in an attempt to slow down Russian troops’ onslaught. The AFU troops were stopped and dispersed as a result of the fire damage. Approximately 90 Ukrainian servicemen, five armoured fighting vehicles, one MT-LB vehicle, and two pickup trucks were eliminated.

◽In Nikolayev–Krivoy Rog direction, over the past 24 hours, the Russian troops overpowered nine attempts of Ukrainian sabotage and reconnaissance groups to breach the rear zones of defence. More than 50 Ukrainian servicemen, seven armored fighting vehicles, and ten cars were destroyed.

◽ Three artillery platoons of the Ukrainian Armed Forces were hit during the counter-battery battle in the territories of Antonovka (Donetsk People’s Republic), Chervonoye and Belyaevka (Kherson region).

✈️ Fighter Aviation of the Russian Aerospace Forces has shot down one Mi-24 of Ukrainian Air Force near Novovoskresenskoye (Kherson region). 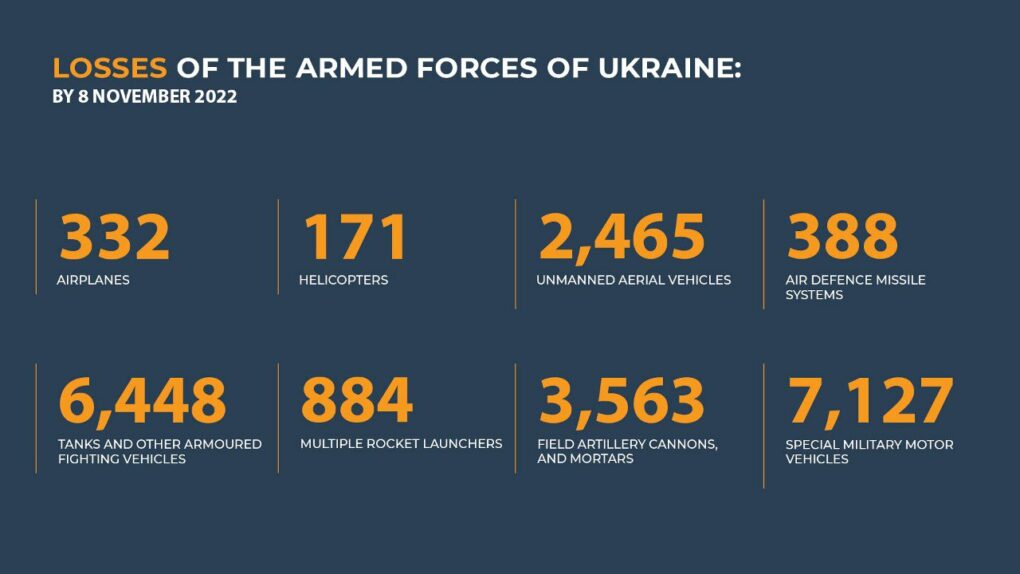