⚡️ Russian Defence Ministry report on the progress of the special military operation in Ukraine (September 17, 2022)

◽️ The Armed Forces of the Russian Federation continue the special military operation.

💥 The enemy involved 2 companies supported by 9 tanks and 16 armoured combat vehicles from 28th Mechanised Brigade made an unsuccessful attempt to launch an offensive near Pravdino (Kherson region).

💥 Russian Aerospace Forces, missile troops and artillery have launched massive fire attacks at the units and reserve forces of the Armed Forces of Ukraine (AFU).

💥 High-precision attacks launched by Russian Aerospace Forces at the provisional bases of Kraken nationalist group, 92nd Mechanised and 81st Airmobile brigades near Dvurechnoye, Shevchenkovo and Kupyansk (Kharkov region) have resulted in the elimination of over 50 nationalists, as well as of more than 10 units of special military equipment and motor vehicles.

💥 Concentrated fire attacks launched at the combat positions of 58th and 93rd mechanised infantry brigades near Zaytsevo (Donetsk People’s Republic) have resulted in the elimination of over 230 Ukrainian servicemen, 10 tanks and 23 armoured combat vehicles.

💥 Moreover, 25 projectiles launched by HIMARS and Olkha MRLS have been destroyed in air near Novaya Kakhovka and Kherson.

⚡️ Russian Defence Ministry report on the progress of the special military operation in Ukraine (September 17, 2022)

◽️ Over the past 24 hours, 2 artillery attacks launched at Volna suburban settlement and an electrical substation located near the power plant have been recorded.

◽️ A total of 15 artillery projectiles have been launched from the area of Nikopol (Dnepropetrovsk region). The AFU artillery units have been neutralised by a counter-attack. 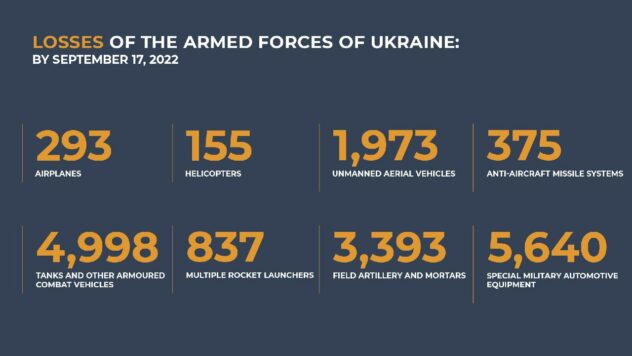