⚡️Russian Defence Ministry report on the progress of the special military operation in Ukraine (September 4, 2022)

◽️Kiev regime continues its unsuccessful attempts to consolidate at several areas towards Nikolayev-Krivoy Rog direction. Aviation of Russian Aerospace Forces, missile troops and artillery launch attacks at the units and reserve forces of the Armed Forces of Ukraine (AFU).

💥High-precision armament of Russian Aerospace Forces has eliminated provisional bases of the units from 80th Air Assault Brigade and a munitions depot near Kramatorsk (Donetsk People’s Republic). Over 120 Ukrainian servicemen and 11 armoured and special motor vehicles have been eliminated.

💥Concentrated fire attacks launched at the positions of the units from 30th mechanised and 95 air assault brigades near Gusarovka (Kharkov region) and Adamovka (Donetsk People’s Republic) have resulted in the elimination of 110 militants. AFU command is manning the abovementioned formations with mobilised citizens from western and central regions of Ukraine.

💥 High-precision attack of Russian Aerospace Forces launched at 2 bases of foreign mercenaries near Kurakhovo (Donetsk People’s Republic) has resulted in the elimination of up to 50 foreign militants.

⚠️ Despite the presence of IAEA representatives at Zaporozhye nuclear power plant, Kiev regime continues provocations aimed at posing a threat to create a technological disaster.

◽️Russian electronic countermeasures means have blocked the arriving drones and forcibly made them throw grenades to secluded areas at over 1,5 km from the plant’s security perimeter. 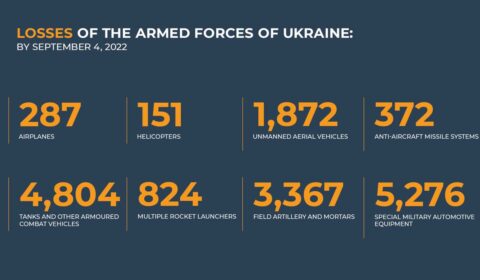 ❗️ While Kiev regime and its western sponsors were preparing an operation aimed at capturing Zaporozhye nuclear power plant on September 1, the international community had to be informed about the establishment of Kiev’s control over the plant by specially selected and prepared ‘mass media representatives’ from Ukraine, USA and United Kingdom in presence of the mission from the International Atomic Energy Agency (IAEA).

◽️ With this purpose, as it was confirmed on September 2 in the public statement by V.Zelensky, Kiev regime added motor cars with Ukrainian and western journalists on board to the convoy of IAEA without prior arrangement.

◽️ The attempt to carry out this provocation was made by Kiev in disregard of mission’s working scenario documentally predetermined by IAEA Secretariat and UN Department for Safety and Security.

◽️ According to thoroughly studied and agreed documents, the access to Russian-controlled territory of Zaporozhye region was to be provided only pursuant to the lists previously presented to Russian Defence Ministry by UN Department for Safery and Security.

◽️ There are no representatives of Ukrainian or other mass media tasked to accompany IAEA’s convoy on September 1 from Kiev-controlled territory to Zaporozhye nuclear power plant in the agreed lists.

◽️ Considering this fact, in order to implement the security protocol for mission’s work, all unauthorised persons were stopped and did not receive access at their attempts to cross the delimitation line with IAEA’s convoy.

◽️ At the same time, on request of IAEA Secretariat, Russian party provided the arrival of over 60 representatives of mass media, including from France, USA, China, Denmark, Japan, Germany, Turkey, Qatar, UAE, South Korea, Vietnam and other countries to cover the mission’s work.

⚠️ In the morning on September 1, the journalists that arrived in Energodar happened to witness the unsuccessful attempt to assault Zaporozhye nuclear power plant by Ukrainian saboteurs and experienced personally an artillery shelling launched by AFU at the nuclear power plant and residential areas of Energodar while hiding in a bomb shelter.