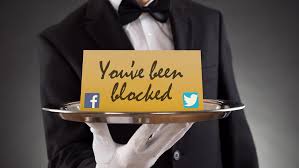 I have the honor to be banned, blocked and deleted from both Facebook and Twitter. It is an honor I take seriously and feel sorry for those thinking that social media is a perfect world. I used Facebook and Twitter as a way to expand the information that I present upon the WtR website and I guess someone takes offense to that.They were just tools to bring more people to see the truth…

You can block my Twitter, You can Block my Facebook, but I still can use them to bring messages from others until they themselves are blocked, as I have been…

It seems someone in Washington DC has a personal issue with me and I am always finding WtR and myself in with the big boys, yet never am I even considered a big boy on the internet. Well at one time WtR was huge and scared a few in DC, it looks like they are determined to keep WtR that way… 😉

Twitter has begun to remove tweets which it deems offensive in a move to further punish abusive behaviour on the site. The social network recently began limiting accounts after the use of language that Twitter feels is objectionable. But in a further crackdown, individual tweets are now being removed from public visibility – without informing the people who posted them.

The Alex Jones Channel has been permanently DELETED by YouTube.

This is a coordinated PURGE.

This is political censorship. pic.twitter.com/gyYiSSYFwI

When you tear out a man’s tongue, you are not proving him a liar. You’re only telling the world that you fear what he might say.

Stop the Truth: For you must lie or die…