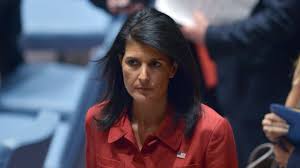 The Devil is a Woman?

There must be something about being named US Ambassador to the UN that brings out the inner mass murderer in people. Madeline Albright famously admitted that she thought 500,000 dead Iraqi children due to US sanctions was “worth it.” John Bolton never met a disagreement he didn’t want to turn into a war. Samantha Power barked about human rights while her Administration’s drones snuffed out human life in unprecedented numbers. The real “butcher of the Balkans” Richard Holbrooke sold the Yugoslavia war on lies. John “Death Squad” Negroponte sold the lie that Saddam Hussein needed to be killed and his country destroyed for democracy to flourish, and so on.

Considering how many millions of civilians have been killed on the war propaganda of US ambassadors to the UN, perhaps the equivalent of another Holocaust could have been avoided if Ron Paul’s HR 1146 has passed 30 years ago.

But nothing could have prepared us for Nikki “Holocaust” Haley, who has thundered into the Trump Administration as US Ambassador to the UN despite hating Trump and Trump hating her. Why would President Trump pick someone for such an influential position despite her being vocally and publicly opposed to the foreign policy that provided the margin of victory for him? We can only guess. Was Trump lying on the campaign trail? Possibly. Does he not bother to notice that he has surrounded himself with people who are deeply opposed, at the DNA level, to the policies he ran and won on? Seems more likely. As Johnny Rotten famously ended the Sex Pistols run, “ever get the feeling you’ve been cheated?”

In fact yes. One-time top Trump supporter Ann Coulter today Tweeted the question “is there anyone out there left who doesn’t want Trump impeached?”

Coulter meant the wall or something else, but she could just as well have been complaining about the foreign policy about-face. Trump ran as a Ron Paul Republican, he governs as a George W. Bush Republican. Cheated? Yes, once again.

Which brings us back to the odious Nikki Haley. Today she no doubt thought she was being clever Tweeting in response to the predictable fact that yet another round of sanctions against North Korea did not result in Kim Jong-Un doing a Gaddafi suicide knife dance, that since the sanctions destroying the North Korean economy — such as it is — have not resulted in Kim’s surrender it was time to hand the matter over to Defense Secretary James Mattis.

Said US top UN diplomat Nikki: “We cut 90% of trade & 30% of oil. I have no problem kicking it to Gen. Mattis because I think he has plenty of options.”

We killed their trade, we destroyed their oil imports and still they have the nerve to defy us and not surrender…so time for World War Three! That’s Nikki. No foreign policy experience beyond the fetid breath of the neocon “experts” whispering in her all-too-willing ear.

But Nikki was not done today. After threatening a war on North Korea that would likely leave ten or more thousand US troops dead, hundreds of thousands of South Korean civilians dead, and maybe another million North Koreans dead, she decided to opine on the utterly failed six year US regime change operation in Syria. Today, as Deir Ezzor has finally been liberated by the Syrian government from the scourge of ISIS, Nikki Haley chose to go on record defending ISIS and al-Qaeda by repeating Obama’s line that Assad must go.

Ponder this for a minute: Assad has just defeated ISIS in Deir Ezzor. ISIS is the reason the US has invaded Syrian sovereignty and initiated military action. Yet according to Nikki Haley Assad’s reward for wiping out ISIS is that he must be deposed — presumably in favor of US-backed rebels who have been in bed with ISIS for six years!

Is Nikki Haley pro-ISIS? Is she pro-al-Qaeda? Is she evil or just stupid?

But if she is not removed from office soon, she will be leading perhaps a million people to their graves.

Copyright © 2017 by RonPaul Institute. Permission to reprint in whole or in part is gladly granted, provided full credit and a live link are given.
Please donate to the Ron Paul Institute