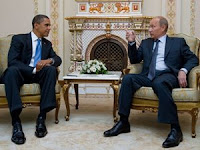 Peskov spoke exclusively to RT following the meeting. The meeting was only to be 1 hour and after it got going it became a meeting of reality that lasted 2 and a half hours.

The Western press is playing this meeting down. At one point they had a heated argument and most Russian’s know how that went, because they know Putin.

Obama has had an awakening and became aware of a Russia that he did not realize existed. 🙂