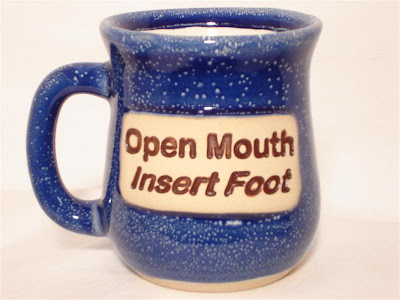 Obama just opened mouth and inserted his foot, big time. This is a quote from American President Obama yesterday that just made me stop in my tracks…

{“I think that it’s important that, even as we move forward with President Medvedev, that Putin understand that the old cold war approaches to US-Russian relations is outdated – that it’s time to move forward in a different direction”, said Obama. “I think Medvedev understands that.

“I think Putin has one foot in the old ways of doing business and one foot in the new. To the extent that we can provide him and the Russian people a clear sense that the US is not seeking an antagonistic relationship, but wants co-operation on nuclear non-proliferation, fighting terrorism, energy issues, we’ll end up having a stronger partner overall in this process.”}

Could Obama try any harder to fail at this trip? I have watched the Western press and they have already set up the ground work for a failed Russia / America reset. Now Obama spouts off a statement that will cause more rift between America and Russia… (Words off the top of his head, or are they?)

As the old saying goes – Obama “speaks with (a) forked tongue!” He has no room to speak of others until his own house is in order and that house is crumbling…

The administration that Obama has plenty of “Cold War Relics”. I know the era that vice president Biden is from and he still “walks the walk and talks the talk” just like many others around Obama!

Obama originally made this gem of a verbalization in a press conference with the Associated Press (AP) before his departure for Russia. Looks like a flagrant staged exclamation to me.

Obama really gives the impression that he intends to play Dmitry Medvedev against Vladimir Putin.

This is ignorant and very dangerous. First off – Putin is not a vice president and furthermore, – Medvedev and Putin are “two peas in a pod” so such an approach will not result in “resetting” Russia-US relations….