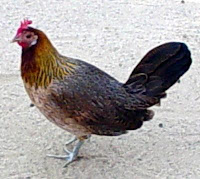 Once again Russia and America play Chicken with Chickens!

This has happened before and will most likely happen again. Russia is banning the import of Chickens from America.

In America you will hear that: “U.S. Agriculture Secretary Tom Vilsack warned that a Russian ban on U.S. chicken imports could hurt relations between the two countries.”

In Russia you will hear: “So What! Stop putting chlorine in the chicken and we will buy your darn chicken!”

I can attest that Russians really dislike chlorine in their food. This is not a made up issue. Russians filter their water from the tap in Moscow – not because it is dangerous but because it has chlorine to purify it. Svet and I filter all water that we use for drinking and cooking.

Us Americans drink chlorinated water and never think twice about it. Not Russians and when it comes to chickens America will not listen:

The Russian Federal Consumer Protection Service said a procedure used by U.S. producers for cooling and disinfecting chicken by immersing it in chlorinated water leads to the contamination of the chicken and is dangerous for human health. “This is not a ban,” Gennady Onishchenko, the service’s head, said Sunday. “Treat poultry the way our laws require and nobody will object.”

“We are paying for [the chicken] and have the right to demand the meat meets our country needs,” he said, adding that U.S. officials had not started addressing the issue until late last year.

I am here to tell you that just ain’t true and I do not want the chlorine in the chicken I eat also!

PS: Europe has upheld a ban on U.S. poultry since 1997 because of the chlorine treatment. (That does not seem to cause an issue with Europe…)