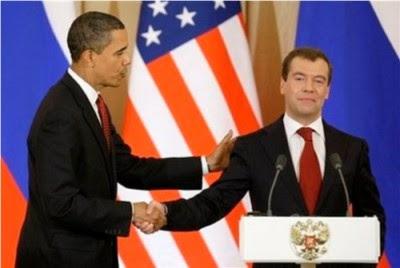 I was wondering when this would come out! I have waited patiently before expressing much information about the new treaty between Russia and America on missiles.

The press has been “Gung Ho” on how wonderful that Obama and Medvedev have worked together and we have this wonderful treaty. Oops…

Russian President Dmitry Medvedev and U.S. President Barack Obama are to sign a new strategic arms treaty on Thursday in Prague. The pact will replace the START 1 treaty, the cornerstone of post-Cold War arms control, which expired on December 5.

“Russia has the right to withdraw from the strategic nuclear weapons treaty if a quantitative and qualitative increase in U.S. strategic missile defense significantly influences the effectiveness of Russian strategic nuclear forces,” the minister said adding that Russia itself will determine the extent of such influence and that this was a specific precondition of Russia. (Link)

Otherwords, install those missiles systems all around Russia and say goodbye to the “Oh So Important Missile Treaty!”

Lavrov has been repeating like a broken record for months, that a new nuclear arms cuts deal be linked to Washington’s missile operations in Eastern Europe. This is a repeat of what Medvedev says also.

I however feel that link will probably not cut the mustard, as the U.S. Senate is unlikely to ratify any document containing a formal link between arms cuts and the defense missile shield.

I do not see this treaty being anything more than a facade that will not be upheld unless America gets their head out of their ass and quit playing games with all the little countries surrounding Russia…
Windows to Russia!