Pickpocket: We All Think That It Will Never Happen To Us! (Part 1) 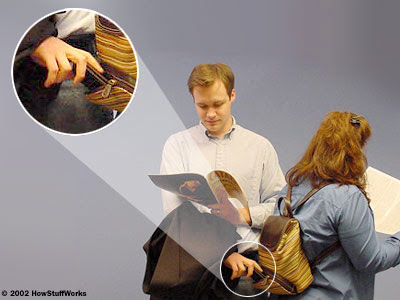 I was drinking that wonderful cup of coffee this morning and really was happy to be back in Moscow, Russia.

Today I am going to start talking about the arrival part of my Ukraine Visa trip. (Part 1) (Part 2)

We are going to start with having our wallet stolen…

I had just traveled all night on a train from Moscow to Kiev. I had a suit case in one hand and a computer case in the other hand. I had a pouch that held my passport around my waist.

I squeezed into a very crowded metro, (subway) car that was packed like sardines. That is when I got pick pocketed. I stepped off the car with about 30 other people and rushed with the crowd to the station exit. As I was exiting the station I always have a habit of reaching down and feeling for my pouch. As I did the worst feeling in the world came over me. My wallet was gone.

I felt like a fool. I had been taken by one of the oldest professions around. The pickpocket-er!

So I had my passport stolen, the migration card (that is so important when you cross the Ukraine border), pictures of my kids and my sweetie (Svet) and some cash.

After regrouping and checking out the damages, I realized that it could have been much worse. I had a copy of my passport in my computer case. (That got me into the hotel with no problems) My credit cards are in another wallet in the suitcase. (That was the money issue solved.)

I went to the metro police and reported it immediately, (but that is tomorrows story).

This was just the start of a long week of very interesting escapades. My motto became “Just take it one day at a time!”

Stay tuned because it gets interesting…