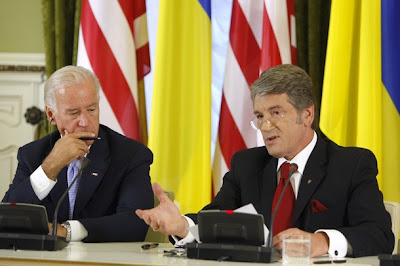 While I was in Ukraine, I had the unfortunate blessing of being in Ukraine at the same time as the U.S. Vice-President Joseph Biden. As Biden flapped his mouth with all earnest in Georgia and Ukraine. The Obama administration learned what kind of reject that Biden is or did they?

Seems that any administration that throws their full support behind the two presidents of Ukraine and Georgia has no problem allowing Biden to flap his same mindset jaws and stir up issues in this part of the world. I am starting to understand that the American Administration of the USA has a real lack of abilities to see past a cold war attitude or any attitude for that matter…

Of course Hillary Clinton came out quickly and said “Washington views Russia, as a great country.” Now if Russia had done something wrong in Americas eyes then they would have expressed that dissatisfaction 14,000 times and hour. But when the Vice President makes statements in Ukraine and Georgia against Russia. Causing issues that have negating effects to any and all work that Obama tried to accomplish in Russia. We get one – Hillary expression of wisdom.

Then this is when I realize that the American political system has reached the lowest levels obtainable for a government. (It is called the gutter and sewer)

I want you to realize and think that while Americans are losing their jobs left and right. That while the government is bailing out Wall street at every drop of the dollar.

Our government has just made sure that Georgia is going to be rearmed with more modern weapons to the tune of 1.4 billion and that Ukraine has been given billions (2) in military concessions to help Georgia and election money for the upcoming presidential elections in Ukraine.

Since when did the American people become less important than countries like Georgia and Ukraine? Those billions are needed back home to care for the homeless and starving…

On any given night in all of America, anywhere up to 2 million people are homeless, according to estimates of the National Law Center on Homelessness and Poverty.

On any given night in just New York City, an estimated 36,000 American children and adults will sleep in homeless shelters. Untold others sleep in the streets and parks and darkest corners of the American dream.

So lets build the military up in Georgia and Ukraine….

PS: Biden just said the truth about real feelings from the Administration. Biden is more trust worthy than the rest at least he tells it like it is. Nothing worse than a politician that smiles and says Hi – when he means “Go to Hell!”