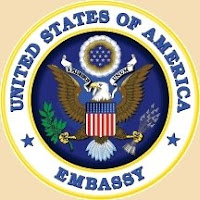 I was drinking my morning cup of wonderful coffee here in Russia and thinking about Part 3 of my Visa Trip to Ukraine.

As you know Part 2 left me less than enchanted with the police of Ukraine and at that point I had decided to get some rest and start the new day at the American Embassy. So that is what I did…

Now this visit to the Embassy was exceptionally fun and fruitful. This was the turning point of the trip from hell – into the trip with the light at the end of the tunnel. I have no complaints about the service that I got from the American Embassy and the day spent with them was a good reminder of American Bureaucracy. (Can anyone say Headache Time!) I got to converse with multiples of Americans and meet some new friends for future adventures. One friend in particular was an 80 year old professor that was a shear joy to talk with and exchange information…

In Russia the American Embassy is 180 degrees the opposite direction. Give me the Russian Embassy any time. Low profile and less flash is an attribute. The same job is accomplished with a whole lot less overhead.

One thing that stood out to me was the political undertones from the American Embassy in Ukraine that infiltrated into the Ukraine Governmental section. America is and has been buying the Ukraine government for some time now. Biden just bought and paid for Ukraine’s help to rearm Georgia. That is a No – No and should be stopped. American politics need to stay out of Ukraine or any other country for that matter…

The American Embassy was very nice and in the usual governmental grind of gears, they accomplished all that I needed to have accomplished and all that they in their power could accomplish. I got a new passport, so at least I could get a visa and get home to Russia.

I had two choices of what I could do.

1. I could apply for a new passport from America and wait at least 10 days before I would get it. (Cost $100.00)
(Or)
2. I could get an Emergency Passport and make my way back to Russia and deal with the new passport with the Moscow American Embassy. (Cost $100.00 and no fee in Moscow for another new passport)

Lets put it this way: If I had chosen choice one (1), I would still be in Ukraine, twiddling my thumbs.

Note: Remember – When you apply for a new passport the old passport is null and void even if you find it later. Next article Part 4 – I get a phone call from the Ukraine Embassy…