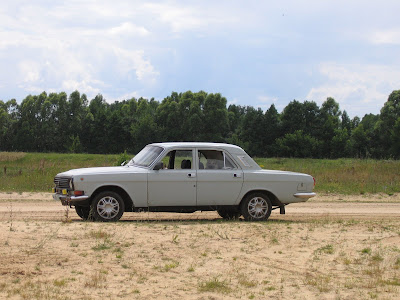 As you know yesterday our car was stolen and as you should do, as quick as possible after finding out that someone has stolen your car. Is start calling important phone numbers. (Of course this is after saying a few important words under your breath that can not be repeated here.)

The first number to call is the police station. (Militsiya in Russia)

Svet called the police, after the shock of looking at the spot that we had parked our car in last night and finding that spot empty. I remember thinking that they can’t “repo it” – We own it! 🙂

I figured that the police would take two hours to get here and I told Svet as much. My experience comes from America and the last time I called about a stolen car, I saw an officer the next day almost 16 hours later.

Well they made a liar out of me – within 10 minutes we had a police van sitting at the front door and two officers waiting to hear the situation. 🙂 – (Surprise surprise – to me!) Being that Svet speaks the best Russian and is Russia, she went to the police station and dealt with the paperwork. (They always look at me like “What is he doing driving a old Volga!” Everyone thinks that an American should be driving a fancy car.)

That took about 1 hour and she was home.

They also sent a photography team and several other people to look at the place where the car was stolen from. They took pictures of an empty parking space and got closeup pictures of the tire tread marks, that were still very clear on the asphalt. 🙂

The police were very professional and nice and as always cared about what happened!

Will all this help? Probably not…