Putin said as he spoke to reporters in Beijing after a meeting of the Shanghai Cooperation Organization (SCO):

“There is no need to upset the Iranians. We need to look for a compromise. If a 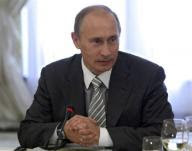 compromise is not found, and the discussions end in a fiasco, then we will see what will happen. So if now, before holding talks – we start announcing some form of sanctions, then we won’t be creating favorable conditions for the talks to end positively. This is why it is premature to talk about this now.”

This was a response to Hillary Clinton’s Iran sanction trip to the Kremlin in Moscow, Russia! The Western press was promoting a peace tour of extraordinary proportions and how Clinton would recoup on the missile issue as a favor from Russia… (Het!)

PS: By the way Medvedev has made it clear in the last few days that Russia will not accept any games with the missile issue. In fact Russia sees this new plan as not a good idea either.