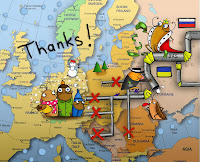 It is becoming winter and what that means in this part of the world is that Ukraine will start her bull with Gas Delivery issues.

So everyone listen and you can almost hear the sound of the gas valve being twisted shut as it grates and squeals as the gas flow is being restricted once again. I have seen 4 winters now and this is the pattern that never ceases to amaze me.

It starts with Ukraine making a series of statements about how they will not accept this and that. Then it becomes a series of we are not sure what will happen. Then the Ukraine President has several fits about how Russia is ripping Ukraine off. They also always promise that all will be OK. This goes on and on until one day Ukraine just stops letting gas flow to Europe and then Ukraine tries to steal enough gas to get themselves through the winter…..

Russia has posted a article in Russia Today:

KIEV, October 13 (RIA Novosti) – Under the existing contracts with Gazprom, Ukraine will be unable to guarantee gas supplies from Russia to Europe during the 2010-11 winter season, the Ukrainian president’s point man on energy security said Tuesday.

Bohdan Sokolovskiy said, however, that Ukraine was fully prepared to ensure Russian gas transits during the upcoming winter period.

Ukrainian President Viktor Yushchenko has repeatedly said that the gas deal agreed by the Russian and Ukrainian prime ministers in January should be renegotiated.

In particular, he is unhappy with the current transit fee, which he says means Ukraine’s state-controlled energy company Naftogaz receives at least $2.5 billion a year less than it should.

Sokolovskiy warned that unless the deal was reviewed, “2010 and 2011 will be unpredictable in terms of gas transit.”

I would like to see a winter with out Ukraine messing up the gas flow to Europe. I do remember last year that I was in Ukraine in January for a visa run and Ukraine was out of gas at that time.

As the picture depicts – The world looks at Russia as the tyrant and Ukraine as the lesser of the evil. Ukraine plays this game every year but it seems to be getting old…