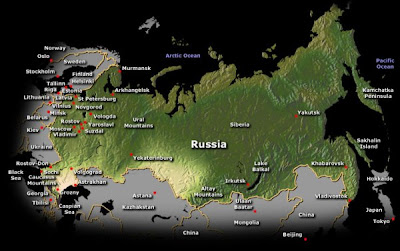 In the last few days in Russia there have been interesting tidbits of information.

1. Vodka is on the decline by 2%….. but the catch is that champagne and sparkling wines are up 16%, cognac production increased 19.6% and the output of low alcohol drinks (beer) doubled.

2. An Estonian court said Monday the trial of a 88-year-old WWII veteran and Hero of the Soviet Union on charges of genocide is due to start on May 20 in the town of Kardla in the country’s western island of Hiiumaa. Meri is a cousin of the late former Estonian president Lennart Meri.

3. The British are Coming! Roughly 7,000 police officers and interior military were attracted to ensure order in the city. The police will be wherever the fans are, Over 50,000 Britain’s fans are expected to arrive for the final match of the UEFA Champions League that Manchester United and Chelsea will play in Moscow May 21. (Today)

4. A 58-kilometer (36-mile) long pipeline to the Yury Korchagin oil and gas field, located in the Russian sector of the Caspian Sea has been completed.

5. Russia has been ranked 131 out of 140 countries & the USA ranked 97 out of 140 in the Global Peace Index, an annual study of how peaceful countries are, both domestically and internationally. (Sounds like the USA and Russia are not very peaceful)

So that is about it… Oh yes the weather for the UEFA Champions League is terrible. Rain, rain and more rain.