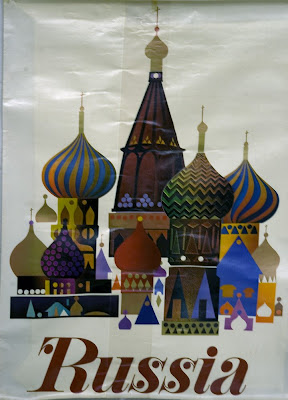 Geography: Russia is the largest country in the world, covering 17.1 million square kilometer. Extending nearly halfway around the northern hemisphere and covering much of eastern and north-eastern Europe as well as the whole of northern Asia, Russia has a maximum east-west extent, along the Arctic Circle, of some 7,700 kilometers and a north-south width of 2,011 to 2,976 kilometers. Russia has an enormous variety of landforms and landscapes. Arctic deserts lie in the extreme north, giving way southward to the tundra and then to the forest zones, which cover about half of the country and give it much of its character. South of the forest zone lies the wooded steppe and steppe, beyond which are small sections of semi-desert along the northern shore of the Caspian Sea. Much of the federation lies in latitudes where the winter cold is intense and there are many rivers, lakes, and swamps, which are freeze in winter.

Climate: Owing to its vast size and the fact that most of Russian’s territory is far removed from any ocean, the climate throughout the country is extremely continental, with distinct periods of warm and cold weather. The continentality of Russia’s climate increases as one travels east, with average temperature differences between the warmest (July) and coldest (January) periods in Eastern Siberia, for example, varying as much as 65 degrees Celsius (117 degrees Fahrenheit). There is, however, much variation in climate based on latitude and physical geography. Temperatures for Moscow and St. Petersburg range from highs of 32 C in the summer to low – 25 C in winter

Population: Of a population of about 145.5 million, nearly 80% are concentrated in Western Russia. Moscow, the largest city in Europe, has a population of 11 million people, and St. Petersburg (former Leningrad) has 5 million inhabitants. Around two-thirds of the population now live in cities. The population size is currently on the decline. Pensioners constitute 23% of the population and the average family size is three people. The average life expectancy rate is much lower than that of other developed countries.

Language: Russian is the country’s official language. It uses the Cyrillic alphabet (rather than the Latin one used by most Western countries), and contains 33 letters. However, the 120 or so nationalities of the Commonwealth of Independent States speak about 48 other languages. Those of Slavic origin (i.e. Russians, Ukrainians and Belorussians) account for approximately 75% of the total population. In Moscow or St Petersburg it is not uncommon to find Russians who speak European languages, especially English.

Today the recent reforms have forced a significant share of the population (especially pensioners) below the poverty line as inflation has outstripped increases in state benefits. There is a developing middle/commercial class involved in legitimate business. Only a very small proportion have become extremely wealthy, commonly known as ‘novye Russkie.’

Culture & Social Life: Theater, cinema, music and arts are important parts of Russian life; as with other countries funding has fallen for these, and private sponsorship is emerging. Features of Russian culture, which are at the highest of international standards, include the Bolshoi Theater, Pushkin Art Gallery in Moscow and Mariinsky (Kirov) Theater and the Hermitage in St. Petersburg. Russians also spend a considerable amount of their leisure time at the homes of friends and relatives – they place much importance on friendship and family. Consequently anniversaries and birthdays are celebrated with more gusto than expatriates may be used to at home.

Religion: Russian Orthodoxy is the main religion in Russian, followed to a lesser extent by Islam, Catholicism, Protestantism and Judaism. Religion has become more popular in Russia over the last few years as the Russian Orthodox Church has received official encouragement through the return of property confiscated during the Soviet period. The rebuilding of Christ the Saviour Cathedral (in Moscow) is symbolic of the restoration of the right to practice a religion in Russia, and this development has evoked much emotion amongst Russian (and foreign) people alike.

Ethnic diversity: The territory of Russia is home to more than 100 different ethnic groups representing a multiplicity of national histories and cultures and many distinct language groups, including Indo-European Slavic, Turkic, Finno-Ugric and others. The vast majority of the population – over four fifths – consists of ethnic Russians with another four percent consisting of Ukrainians and Belarussians.

International time: Moscow and St. Petersburg are three hours ahead of London time and eight hours ahead of New York time. Vladivostok is seven hours ahead of Moscow. Travel time to Moscow is about 3 hours and 35 minutes by air from London or Paris, 9 hours from New York, and 10 hours and 25 minutes from Tokyo.

Now that was exciting?