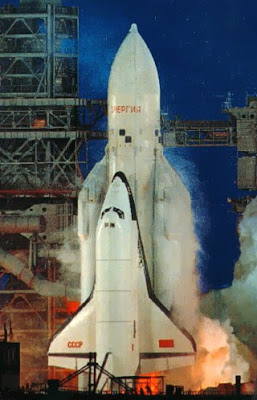 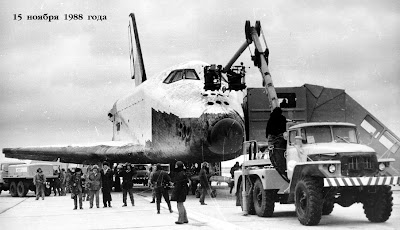 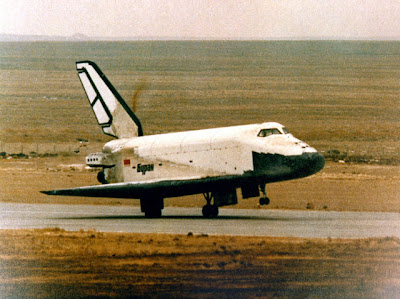 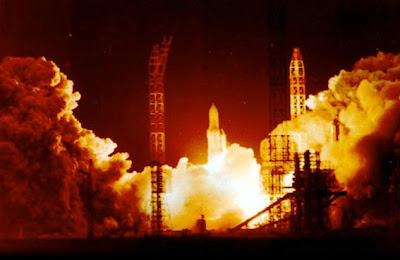 Today is the 20th anniversary of the historic flight of Buran. What you may ask is a Buran?

The Buran spacecraft (Russian: Буран, “Snowstorm” or “Blizzard”), GRAU index 11F35 K1, was the only fully completed and operational space shuttle vehicle from the Soviet Buran program. With a design that borrowed heavily from the American Space Shuttle, the Buran completed one unmanned spaceflight in 1988 before cancellation of the Soviet shuttle program in 1993. The Buran was subsequently destroyed by a hangar collapse in 2002.

Like its American counterpart, the Buran, when in transit from its landing sites back to the launch complex, was transported on the back of a large jet aeroplane. It was piggy-backed on the Antonov An-225 Mriya aircraft, which was designed for this task and remains the largest aircraft in the world.

Several shuttles were produced, one of those, the OK-GLI was modified to fly with jet engines for aerodynamic testing. One painted mock shuttle (the former static test-article OK-TVA) is now a ride simulating space flight in Gorky Park, Moscow. The OK-GLI was sold by its owner NPO Energia, shipped to Sydney in Australia and subsequently displayed at the Sydney Olympics in 2000. Shortly after, the new owner went bankrupt and the OK-GLI shuttle then went to Bahrain for a number of years while legal ownership status was in dispute. The Sydney/Bahrain (OK-GLI) shuttle was acquired by the German Technikmuseum Speyer in 2004, and has been transported to the museum, where it is exhibited to the general public.

Pavel Sharov from Cosmonauts News Magazine explains the advantages the Soviets had over their rivals in the U.S.

“The USSR surpassed the Americans in technology – U.S. shuttles can only be landed by humans, while the Buran lands automatically,” Sharov said.

Magomet Talboev was one of the pilots who test-flew the shuttle without going into orbit. He said the Soviet authorities had high hopes for the multi-billion dollar spacecraft.

“The Energia-Buran programme was started to get the capability to attack the United States, just like the shuttle was able to attack the USSR. We also wanted to take the Skylab space station from orbit. Buran was supposed to put it in its cargo bay and deliver it back to Earth for studies,” Tolboev said.

On May 12, 2002, a hangar housing a Buran 1.01 orbiter (the actual Buran that flew in 1988) collapsed due to poor maintenance in Kazakhstan. The collapse killed eight workers and destroyed the orbiter as well as a mock-up of an Energia booster rocket.

Buran technologies may make an unexpected return to the space industry as well.

Because NASA will soon retire its ageing space shuttle fleet, some American and Russian scientists are beginning to think of ways to revive the Buran programme.

It may be more economical than developing an entirely new spacecraft from scratch.