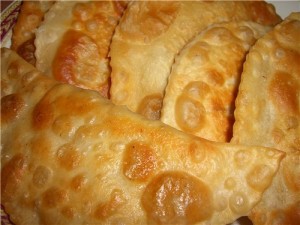 A popular Russian/Georgian/Ukraine food that most likely started in Georgia. The Chebureki consist of a thin layer of dough and a ground meat filling, then deep-fried in a skillet of real butter. I call them a meat filled turnover as they are made the same, except the filling is meat and sometimes cheese, instead of fruit…

Ingredients:
4 cups white sifted flour
1 cup water
1 egg, slightly whipped
2 tablespoons real butter
a half spoonful of salt
meat filling (The filling is your choice of meat or meats and your choice of seasonings. I use a mixture of everything!)

Method:
In a large pot, bring the water to a boil, adding the butter and salt and stirring until melted.

Quickly mix in about a half cup of the flour and stir until smooth.

Add the egg and the remaining flour, using more flour as necessary to make a not-too-stiff dough, and knead until soft and even.

Let rest in a covered bowl at room temperature for one hour.

Meanwhile, prepare the filling by taking several handfuls of fresh mushrooms, trimming the ends and slicing thinly, and frying gently in butter with the addition of some finely chopped Spanish onion.

When softened, season to taste with salt, black pepper and some chopped mixed greens consisting of flat-leaf parsley, coriander and celery leaves.

Let everything cool down so that you can handle it… 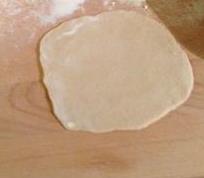 To make the chebureki:
1. Roll the dough to a thickness of about your little finger.

2. Roll the dough into a thin sheet, cut a circle, no make it bigger than that! Yes that is better… 🙂

3. Place a dough circle into the open counter, add a generous spoonful of the filling in the middle.

4. Fold the dough in half and press a little around the edge to seal. I wet my thumb and finger and pinch it shut…

When all of the chebureki have been created, heat some vegetable oil and or real butter in a large pan and fry over medium heat until golden delicious brown…

Now the only problem is that people will sneak into the kitchen and steal these as you are not looking, so you better make a double batch of them…