Everyday while walking around Russia, whether in Moscow, side of the highway or a little village. You will find Babushkas selling “Salt Cucumbers”. These cucumbers look exactly like pickles but taste totally different.

I am a dill pickle lover and when I first came to Russia I saw pickles (cucumbers) everywhere. I finally got one and took a big bite! That is not a pickle I said…

That bite changed my idea on how to preserve cucumbers forever. After the initial shock of not having a vinegar kick with the dill, I really like “Salt Pickles”.

I then learned that these are not pickles but “Salt Cucumbers”. In Russia they do not make small batches of “Salt Cucumbers” the process is made a barrel at a time. This is a old time preserving method that is handed down from generation to generation. So you have somewhere around 150,000,000 “Salt Cucumber” recipes! 🙂

1. 800 grams salt for every 10 liters of water – (So that salt is fully dissolved the water should be boiled and salt added as boiling, then allowed to cool)

3. 50 grams of horseradish (this is for flavor only not to make spicy, so you really could leave it out and not effect the end result much)

4. garlic claws only (start with 3 or 4 whole garlic clusters)

5. leaves of black current or cherry (as desired)

7. celery leaves or parsley (as desired)

8. bitter peppers (3-5 peppers but the more the merrier)

1. 4 or more big glass gallon jars or about 4 liter size glass jars or what ever you have handy. (Or big bucket, in America you have pickle buckets for free, but glass is the best)

2. lids or use poly plastic as a seal.

First the cucumbers: initially sort out, and discarding those which are overripe, damaged and those that just do not make you happy. 🙂

Second sort and salt the cucumbers by size. Always salt according to size (small, medium, large) in separate containers. Makes a better product.

Cucumbers then need to be thoroughly wash. Try to use only cucumbers that are solid and no cutting away bad areas. (other words no bruised, cuts or broken skin)

To prepare ingredients – Take dill and tarragon, horseradish (root), garlic claw no skin, bitter peppers, clean them and to chop into pieces about 5 to 15 cm long. (some like onion also and I suggest to crush a garlic claw slightly to help release the flavor. I also like to use the whole pepper and leave stem on, they are very edible also.)

On the bottom of each jar – place a layer of the mixture of spices, and then the cucumbers as 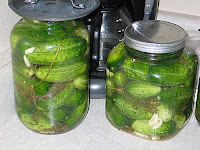 Salt water that you made as an ingredient – (above) is now poured over top of the cucumbers to fill the jars to the brim.

Seal the jar with lids – to keep out dirt and debris.

To storing the salt cucumbers:

The best temperature is around 0-3 degrees centigrade. The salt cucumbers can be eaten in about 50 to 60 days at this temperature.

In room temperature storage, the fermentation of cucumbers will be done in 30 days. (but warning: the process is quicker at a higher temp. but quality is lower)

Notes:
Use uncut baby onions and whole peppers. They will convert like the cucumbers and are delicious. Medium size cucumbers are the best for this recipe.

This recipe is almost identical to one my Grandma made except about a kilo of sugar is used instead of salt and transplant a third of the water with vinegar. (sweet pickles)