Russia: The Communist Pioneer Movement is Alive and Well!

I was drinking my morning cup of wonderful coffee here in Moscow Russia. I came across this tidbit of information on the airwaves in Russia…

<---- Picture from 2007! Seems that about 3,000 schoolchildren from Moscow and surrounding regions in Russia had a get together on the Red Square today (Sunday) to sign up in the communist Pioneer Movement, they also paid their respects to Lenin at the famous Lenin’s mausoleum. The Communist Party leader, Vladimir Zyuganov and several lawmakers were present at the ceremony, presenting the new members with the traditional red neckerchiefs worn by school children since the founding of the movement in the Soviet Union 87 years ago. Pioneer camp was the name for the vacation or summer camp of Young Pioneers. In the 20th 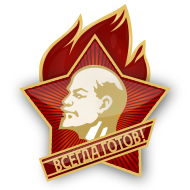 century these camps existed in many of the socialist country’s, particularly in the Soviet Union.

This tradition has been carried on to this day by Russia and other CIS countries. (Link)

Svet says that she was very involved in the Pioneer Camp and it was a wonderful. Svet’s Mom was also a member when she was young. This is a tremendous growth and learning opportunity for kids in Russia.

From what I see this is a lot like the Scouts in America and even can be compared to the 4-H Club in America.