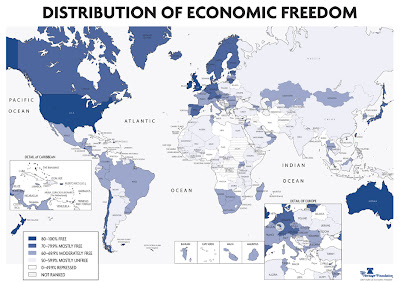 It is not very often that I get beaten to the punch on something that I feel is important! Real Russian Project has posted an article on Russia and economic freedom!

Rankings Versus Reality:
It’s Time for Inside-the-Beltway Conservatives
to Get Real on Russia
By: Yuri Mamchur

I scrapped my article because I think that Yuri did a good job at getting the point across!

Thank you Yuri, for real insight.

PS: This is the link, to the know it all: American Foundation!
http://www.heritage.org/index/

(Click: Read More for Yuri’s article)========================================
Last week, the Heritage Foundation, one of the largest and perhaps most influential think tanks in Washington, D.C., published its annual global rankings of economic freedom. While think tank reports seldom have as much impact as their authors would like to believe, this particular document was published in partnership with The Wall Street Journal.

The report claimed that out of 150 countries surveyed in 2007, Russia is now ranked 134th in the world in terms of economic freedom, allegedly slipping fourteen spots from its lowly 120th ranking at the end of 2006. Russia was supposedly less free than all of the other countries in the former Soviet Union, with the exceptions of Belarus and Turkmenistan. Russia is also said to be lagging far behind such surging economic powerhouses as Pakistan and Cambodia.

Not just oil, gas, timber and metals anymore – Russia’s booming consumer sector has drawn the most interest from emerging market fund managers and investment banks in the past year.

The Kingdom of Saudi Arabia, where members of the 10,000 strong Saudi royal family find their way into every major deal, was ranked sixty spots ahead of Russia. This could lead a cynical Russian to ask whether the Heritage rankings are based on a country’s actual investment climate and success in global markets, or whether the country in question is a close ally of America. The point here is not to belittle the hard won economic gains that have been made by any particular country, but to challenge the premise that countries can be neatly graded on some imaginary freedom scale by think tank scholars sitting in Washington D.C.

In the same year that the Heritage Foundation claims that Russia backslid on democracy and economic freedom, global investors cast a vote of confidence in the country by pouring over $55 billion into the Russian economy. Many scholars and pundits can try to dismiss this record as a lucky break caused by high commodity prices and a glut of global liquidity, but one need not look very far to find some very large holes in this argument.

First, the biggest IPO recorded worldwide in 2007 was for Russia’s Vneshtorbank (VTB) – the second largest retail bank in the country – not for some Russian oil and gas or mining conglomerate. Second, in 2008 the largest Russian IPO will be for Unified Energy Systems, when the Russian government will be breaking up the state-owned monopoly and privatizing Russia’s electric power grid. Third, for anyone who actually flips past the Wall Street Journal’s editorial page to the business pages, the fastest rising Russian stocks in recent months have not been energy exporting giants such as Gazprom, Lukoil, and Rosneft, but consumer-oriented companies that are enjoying strong domestic growth like Golden Telecom, Rostelekom, and Wimm-Bill-Dann.

Fourth, many countries are receiving huge windfalls from oil and gas prices as well, but their economies remain basket cases – Venezuela, Nigeria and Iran come to mind – while others have failed to convert their enormous natural resources into any globally recognized brands or diversified companies. Just ask yourself – how many global emerging market equity funds hold Petreleos de Venezuela in their portfolios, as opposed to Gazprom? And how many car factories are Toyota, Nissan, and Ford building in Saudi Arabia, as compared with Russia? To ask each question is to already know the answer.

Granted, Russia is still not Switzerland by a long shot. As President Putin’s designated successor, Dimitri Medvedev, has repeatedly acknowledged, Russia has severe problems that threaten its long-term economic growth, including double digit inflation, a declining population outside major cities, and the age old bane of corruption. But the question remains: why do so many Western think tanks and scholars feel compelled to downplay or dismiss the real economic gains that Russians have achieved in the last eight years? Is it just opposition to the Putin government and its policies, or is there an ingrained anti-Russian bias in many American institutions, particularly among Washington’s leading conservative think tanks?

The Cold War has left behind many legacies, and one of them was a certain number of people and donors inside the Beltway who still proudly take credit for hastening the collapse of the Soviet Union in the 1980s. Unfortunately, when it comes to Russia, many of these same aging donors and think tankers have remained stuck on autopilot since 1992. They still view Moscow as the seat of an Evil Empire that must accept having NATO on its doorstep and being cut out of energy deals in its own back yard.

After 9/11, many inside-the-Beltway conservatives were prepared to accept President Bush’s vision of the America and Russia as allies in the war on international terrorism. But the well-financed “revolutions” in Ukraine and Georgia soon restored these die hard Russophobes to their previous default worldview. Rather than seeing these developments for what they actually were – the settling of accounts between rival clans of oligarchs and their political patrons in each country – each “revolution” was magnified into a zero sum struggle for power and influence between Moscow and Washington. Such simplistic attitudes naturally lead to a host of logical absurdities and ideological contradictions, with the only consistency being that Russia’s position must always be wrong.

For example, when Gazprom stopped subsidizing several former Soviet republics with cheap natural gas in 2005-2007 , Russia was condemned for allegedly using energy as a weapon to punish ex-Soviet republics for not towing Moscow’s line. Even Belarus, which The Wall Street Journal and The Economist had previously derided as an impoverished Kremlin puppet state, was instantly transformed, following its price dispute with Gazprom, into yet another victim of the Kremlin’s “energy imperialism”. The idea that Russia simply cannot afford to subsidize its neighbors anymore, or that former Soviet republics that claim to have adopted market economics ought to be charged at least half of what Western Europeans are paying for the same Russian gas never seems to have registered with these so-called “free marketeers”.

Naturally, all of this leads us to the question of motives and double standards. No less a Putin skeptic than Washington Post reporter Anne Applebaum, has asked how much influence money from deposed Russian oligarchs like Mikhail Khodorkovsky has bought in Washington. It remains far more politically acceptable for elite Washington conservatives to be wined in dined in Amman or Singapore than in Moscow. When the President of Georgia is an alumnus of Columbia University and mouths all the right buzzwords, American think tankers don’t ask why they are attending a democracy promotion conference in Tbilisi that costs $6,000 per person while the average Georgian makes $300 a month.

Ultimately, why should ordinary Americans care about any of this? What affect does it have on their lives, their jobs, or their investments? The answer, which we have all been reminded of in recent weeks, is that after decades of Americans investing in the rest of the world, the world is now investing in America. If Kuwaiti and Abu Dhabi-based sovereign wealth funds can buy major stakes in Merrill Lynch and Citigroup then the Kremlin’s $180 billion Stabilization Fund can invest in American companies and capital markets. Russian companies also want to swap assets with multinational oil companies in return for exploration and development contracts in Russia – which means Gazprom and Rosneft may be acquiring shares of oil refineries in Texas or Lousiana in the not too distant future.

Twenty five years ago, when many American protectionists were alarmed about government-backed Japanese firms allegedly buying up a “bankrupt” America, a Reaganite supply-sider named George Gilder wrote a book titled Wealth and Poverty, supporting free trade and arguing for American optimism. Gilder wrote that “capital goes where it is welcomed.” and argued that Americans should welcome international investment, regardless of whether it comes from foreign firms with government ties or not.

What was true in the 1980s holds even more true in today’s globalizing world. If American conservatives are confident that democracy and free trade will prevail over protectionism and authoritarianism, then they should believe that our marketplace will have a greater effect on Chinese, Arab or Russian investors and policies than their money will have on our markets. It would be a shame if a combination of Cold War nostalgia and ignorance were to cost the U.S. thousands of jobs, and prevent the formation of a lasting partnership between America and Russia.