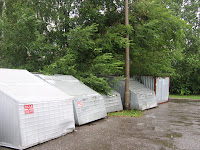 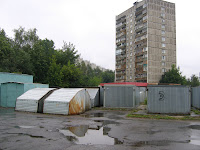 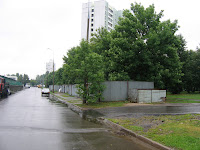 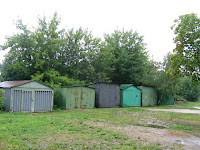 I posted an article awhile back about the special garages that are everywhere in Moscow!
http://kylekeeton.com/2007/07/russian-garage

Well Moscow has decided that they have to go! Moscow wants to use the parking areas to build better parking and other businesses.

I will admit that these garages are everywhere, they also put them on kids playgrounds and that I think, should be a crime! I use to have a better thoughts about them but I have studied them and over half of them are empty & or just used to store junk!
=================================
Every Muscovite is familiar with the scene: a courtyard lined with unsightly metal garages that blight surroundings, obstructing paths and forming labyrinths that can be dangerous to navigate at night.

To the delight of many who loathe the rusty, ubiquitous rakushki, or metal storage sheds, City Hall has been demolishing them with great abandon over the past several years and putting up multistory garages or other buildings in their place.

Part of the problem is that while the garages are private property, the plots underneath them are usually city property. Proponents of ridding the city of rakushki argue that they take up valuable space that could be used for multistory garages that could help alleviate the city’s dire traffic woes.

The lack of parking spaces has exacerbated heavy traffic jams because drivers park in the road, a practice that could be reduced with the construction of more multistory garages, said Grigory Vengerov, deputy head of the Moscow City Union of Motorists.

But Vengerov, who is working with City Hall to hammer out a legal basis for tearing down rakushki and replacing them with other parking facilities, also gave a nod to aesthetics, calling demolition of the sheds “correct.” he said, “They are making the city ugly,”

Dmitry Strzhezhovsky, a youthful 70-year-old pensioner who lives in central Moscow, said rakushki prevented all the drivers except their owners from using the area to park.

Ivanova, 52, said, Her courtyard in northern Moscow was completely filled with rakushki, making it impossible to drive or even walk through. She said there was no space in the courtyard for her to park her car and that she typically has to drive around nearby courtyards to find a spot and then walk home on foot. She said. “There are rakushki on the lawns, on children’s playgrounds,”
=================================

This is becoming a hot issue here in Moscow, people do not want to loose their rakushki because the garage gives them a private, no one can steal parking space!