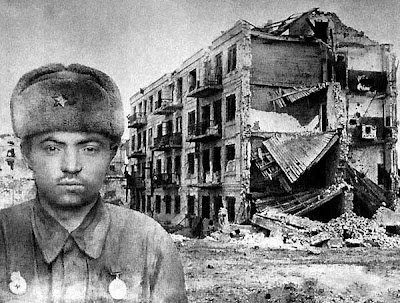 Today we’ll remember one of the bloodiest battles of the World War II & the turning point of the war for the Soviet Union .

The battle for the city of Stalingrad in the Soviet Union was the largest and bloodiest battle in the history of human warfare. It also marked the beginning of the end of the mighty German army.
The battle began in the beginning of September, 1942 and ended on February 2nd, 1943. Casualty figures are not exactly known, but estimates put the death toll at well over 800,000. The German army lost more than 150,000 soldiers and the remaining 650,000 were Russian soldiers and civilians who died defending their city.

This battle was most likely the decisive battle of the world war. If the Germans had won, Russia would have fallen for sure, the Nazis would have gained control of Russia’s vast oil fields and all of their vital farmland and natural resources for the production of steel. Germany would have become immune to blockades against their supply routes. They would have been nearly impossible to defeat.

The Soviets were so desperate to defend the city, they destroyed all the bridges crossing the Volga River and all available boats so that their own armies could not retreat from Stalingrad. They were stuck there to fight or die. This newspaper describes this very action taken by the Russians.
You can read more about the Stalingrad Battle in Wikidedia. And to look at very impressive documentary photos here. LINK….


Full version of this video (Lost Evidence: ” Stalingrad ” 1 of 5) you can watch here.

We placed a picture of Pavlov’s House at the header of this article because we want to tell you this story. And this story is just one particular story of the Stalingrad Battle.

The house was a four-story building in the city centre of Stalingrad, built parallel to the embankment of the river Volga and overseeing the “9th January Square”, a large square named for Bloody Sunday (1905). The house was attacked by the German invaders in September 1942. A platoon of the 13th Guards Division was ordered to seize and defend it. The platoon was commanded by Yakov Pavlov, a junior commander replacing his wounded superior. They were successful, although only four men survived the combat. Together they went on defending the building on their own. After several days, reinforcements finally arrived, equipping the defenders with machine-guns, anti-tank rifles and mortars. The men, now a garrison of twenty-five, surrounded the building with barbed wire and minefields, and established anti-tank and machine-gun posts at the windows. For better internal communications and supplies they breached the walls in the basement and upper floors, and dug a communications trench to Soviet positions outside. Supplies were brought in via the trench or by boats crossing the river, defying German air raids and shelling.

Nevertheless food and especially water was in short supply. Lacking beds, the soldiers tried to sleep on insulation wool torn off pipes, yet usually the Germans kept shooting at the house with deafening machine-gun fire day and night. The Germans attacked the building several times a day. Each time German infantry or tanks tried to cross the square and to close in on the house, Pavlov’s men put them under heavy fire from within the basement, from the windows and from the roof top. Leaving behind a square covered with corpses and steel, the Germans had to retreat again.

Eventually the defenders, as well as the Russian civilians who kept living in the basement all that time, held out during intensive fighting from 23 September until 25 November 1942, when they were relieved by the counter-attacking Soviet forces.

Pavlov’s House became a symbol of the stubborn resistance of the Soviet Union in the Battle of Stalingrad, and in the Great Patriotic War in general. It stands out prominently because the German armies had previously conquered cities and entire countries within weeks; yet they were unable to capture a single half-ruined house, defended most of the time by just over a dozen soldiers, in spite of trying for two months. It is reported that the building at the “9th January Square” was marked as a fortress in German maps. (Read more in Wikipedia)

To remember this awful war, and awful battle! When Motherland calls – everybody will go – will go and die!

I wrote this article just to show you a part of our Great War! And I ask you do you really think that people who survived this war, people who still remember this War (I and my girls still cry at our Victory Day). Do you think such people really wants a new War?…


And I just found out that Dmitri Minaev visited Volgograd (the modern name of Stalingrad) last year and here you can find his impressions: LINK.
Read that’s interesting!

Best wishes
(by the way Russian people still wish peaсe to each other as one of New Year wish!),
Svet and Kyle