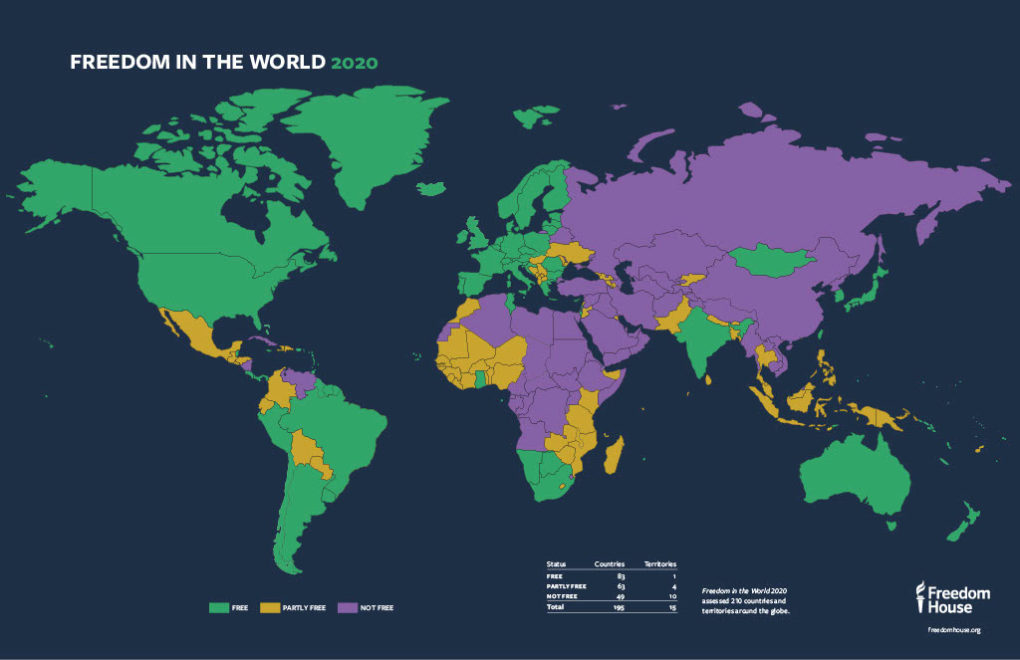 Snowden would be in prison in the US. I have been in jail in the US all for expressing my personal opinion about subjects that I was told to shut up about. I left when it was obvious that freedom was a farce in America…

The Freedom House article shows Russia as not free! Yet if Assange had made it to Russia instead of the UK, he would be living at least out of prison, as Snowden is doing. I ask myself would Manning be a girl right now? I feel that he was pushed as the only way out of permanent solitary confinement to either change or else…

Doesn’t matter either way. What matters is that Russia is free, yes somethings are as with everywhere, like wearing damn seat belts as you drive and turn them damn headlights on for safety stupidity irritate me. But I am free enough to say what I want when I want and I find that increasingly harder to do in the US.

It seems that western think tanks, media and whatnot’s have become so corrupted with propaganda and love of money that truth is just a dirty word anymore.

The map above is telling!

Oh, to piss you off a bit more; Guns do not make you free. Well unless you are willing to use them, before they take them from you. But regardless, that gun does not mean freedom. For many and I mean many Russians have hunting weapons. Hunting is big in Russia. Wild Boar, deer, ducks, geese whatever. I spend much of my life in a Russian village and believe me they have weapons. Maybe just shotguns and double bore rifles, but they are weapons.

Also; I am freer than you are in the western world. I know, I have lived here in Russia since 2006. I found peace and harmony and very much a stable society!

Snowden has been here since 2013 and while I wonder about his validity on many things. He is free to travel and live a peaceful life in Russia. It is just right that he can. My opinion of Snowden is my opinion and he deserves a life if what he did is truth and we do know that there is much truth in what Assange and Snowden and Manning have said and done.

Assange – No Freedom prison UK (Likely to die in prison!)

Snowden – Free to roam Russia… Girlfriend lives with him. He writes and works in Russia. Hmm!

Manning – Prison USA, Became a girl, Prison, tried to kill itself and now once again let free to start the process over again. (Permanently damage goods in its case!)