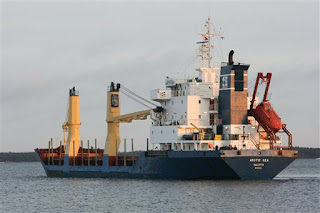 The Arctic Sea Freighter was hijacked in the Baltic Sea in late July after leaving a Finnish port. Russian naval vessels intercepted the ship weeks later off Cape Verde, thousands of kilometers from the Algerian port where it was supposed to deliver a load of timber. (It really did have timber on it.)

I have kept quiet about this because I have watched what Russia has been saying about the situation. I have also watched the Western press analyze what was on that freighter. I have seen so far: lumber, illegal music CD’s, illegal DVD’s, drugs, small arm weapons, nuclear weapons, anti aircraft weapons and the favorite word is clandestine cargo! That is a big word that many people have never used. (Why not just say secret cargo?)

Now on top of all things that have been mentioned, the Western press says it is possible that S-300 surface-to-air missiles destined for Iran or Syria were on the freighter. (We no longer have clandestine cargo but overt cargo…)

But Lavrov said “the presence of S-300s on board the Arctic Sea cargo ship is a complete lie,” RIA-Novosti reported.

(This tactic is used in American Football all the time and called a fake! The play fake is the most effective way to confuse a defense. It sucks defenders in by making them anticipate a running play, which results in less coverage against your receivers.)

What do you think?