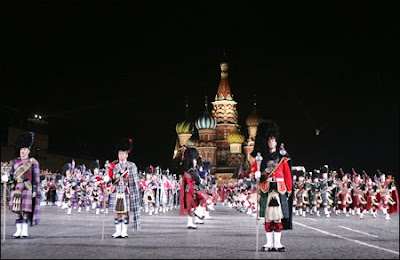 The British Foreign Office has decided not to send 40 bagpipers to a military music festival in Moscow in protest over Russia’s actions in Georgia, a foreign office spokesperson said.

The festival to mark the 325th anniversary of the Russian Imperial Guards is scheduled to take place on September 11-14 in central Moscow.

Military bands from the U.K., Austria, Ireland, Scotland, and Canada have been invited to the event. The Scottish bagpipers were due to leave for Russia on September 8.

A spokesperson for the Foreign Office said on Friday however that the Royal Regiment of Fusiliers would not be able to attend the Kremlin Zorya festival due to the crisis in relations between Russia and the West over the recent war in Georgia.

The bagpipers have been one of the most popular acts at the festival in recent years.

OK, is it just me or is this a sign of the mental and maturity level of the West?

What does the issues in South Ossetia and Georgia have to do with a 325 year old Military event?

I guess: the only reason that I can see why British would not go to the Festival is…..?

There is no reason……