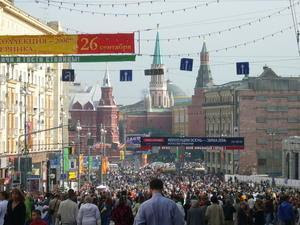 This weekend Moscow will be fun. It is Happy Birthday Moscow!

Every year, as Moscow gets older, the festivities to honor its founding get bigger and brighter. This time, as our fair city celebrates its 861

birthday, numerous events will be held in all the districts, though as always the grandest celebrations will take place downtown. Which is why all the major streets will become pedestrian for the weekend of September 6 and 7. Tverskaya, Mohovaya, Ohotny Ryad, Lubyanka, Teatralny Proezd and various other streets downtown will be closed for cars and public transport (the metro will be in full operation). For tourists and visitors to the Russian capital you are here at a good time: the city will be all dressed up and looking its finest, with decorations and illumination art visible at every street corner. (Link)

We are going downtown and take pictures. It is always fun to walk around downtown Moscow because you get to see a mixture of all nationalities on earth. When Moscow has big events like this everyone comes out of the wood work, so to speak!

■ 21. “The Church Bells of Moscow” classical and religious music concert. September 7, 2 p.m. – 10 p.m. ( the square outside of the Cathedral of Christ the Savior).

■ 29. Wreath-laying ceremony at the Tomb of the Unknown Soldier. September 7, 10 a.m. (Alexander Garden).

So if you are in Moscow come on downtown! 🙂