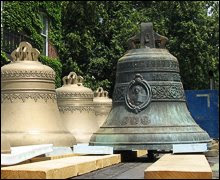 This morning while drinking my morning cup of coffee, I was thinking about the Danilov bells that I wrote about a few months ago. I figured it was time for them to show up in Russia….. (Link)

On September 7, 2008, the Danilov bells will finally return to Russia after a 78-year stay in Harvard University. On that date the ship bearing them will dock in St. Petersburg and, by the 12th of September, the ceremonial procession will reach their home – the Danilov Monastery in Moscow. In the beginning of the series dedicated to this landmark event for the Russian Orthodox Church, RT looks at the significance of the Danilov bells, their compelling sound and their rich history.

The bells were highly valued even before their removal in the early 20th century. Konstantin Saradjev, a musical genius who could distinguish all of Moscow’s 4000 bells simply by listening to their ring, wrote of the Danilov bells in the early 1900s: “They have an extraordinary musical value. It is an ingenious set of bells, which finds a significant place not only in church music, but also in the science of sound”. Today, the Danilov bells are one of the few remaining heavy musical peals in the world.

The Danilov bells come in a spectacular set of 18, all of of different shapes, sizes, metal compositions and pitch. Since most of them were cast at the Finlyandsky factory in Moscow between 1890 and 1907, they are all tuned to perfect harmony. Some bells in the set, however, date as far back as 1682. Such, for example, is the ‘Pervyi’ (or ‘first’) bell, which was Tsar Fyodor Alekseevich’s present to the Danilov Monastery in 1683. Each Danilov bell is ornate with depictions of Russian Orthodox objects of worship, such as portraits of saints and inscriptions in Slavic.

The main bell of the set is the ‘Bolshoy’ (literally meaning ‘Big’ in Russian). The name is a telling one, since this musical heavyweight is over 12 tonnes. To hang it, the Danilov Monastery’s old bell tower had to be replaced with a new one in 1904. The alloy used for the Bolshoy’s creation contains a significant part of copper, which means that the sound of the bell combines distinctively bright overtones with rich deep notes. This is a very rare combination for bells of such size. The other two major bells in the set, the ‘Polieleynyi’ (‘celebratory’) and the ‘Budnichnyi’ (‘everyday’), weigh 6 and 25 tonnes respectively. The Danilov peal also includes a set of ten bells, weighing between 30 and 500 kg, which are used to accompany choral singing, and four light bells, the sound of which perfectly completes the sound of the Bolshoy.

However, the Danilov bells are not only famous for their harmonious sound and artistic merit. Their story is one of dramatic uprooting, cultural exchange and eventual homecoming. By 1930, the Soviet government had firmly decided that “the sound of bells in Russia should be replaced with the sound of factory whistles.” Thus, the compelling and mysterious ring of the Danilov bells was to be reduced to scrap metal. It was due to sheer luck that Charles Crane, a Chicago industrialist, heard them while travelling around Russia in 1930. He was so taken by their music that he decided to save them from assured destruction. This proved to be easy: he bought them for the price of scrap bronze and, in a gesture of goodwill, donated them to Harvard University.

The bells were not immediately a popular feature on the university campus. Harvard students, claiming that the bells distracted them from sleep and study, called for their immediate removal and invented refined forms of protest. They banged pots and pans, heaved alarm clocks out of their windows and even flushed all of the toilets in the building simultaneously. The president of Harvard at the time was only interested in the bells if they could play “Fair Harvard”, the university’s anthem. Unfortunately, he didn’t realise that the Russian style of bell ringing differed from the Western one in so far as the bells were not designed to play melodies; they were made to create complicated rhythmic patterns. So, on April 5, 1931 the Danilov bells were welcomed in the U.S. with headlines such as “Tons of Chimes at Harvard and Not a Note of Music”.

Eventually, the bells worked their way into the hearts, minds and ears of Harvard University staff and students. When talk of returning the bells back to Russia first started during the 1980s, the university responded with stiff rejection. A consensus was only reached a quarter of a century later, when the Russian side offered to replace the Danilov bells with exact replicas, matching the original ones not only in shape, but also in sound. So, the bells will now return to their spiritual home in the Danilov Monastery in Moscow, forever leaving a mark on the U.S. soundscape. (Link)

Welcome home Danilov bells and I am glad you have arrived safe!