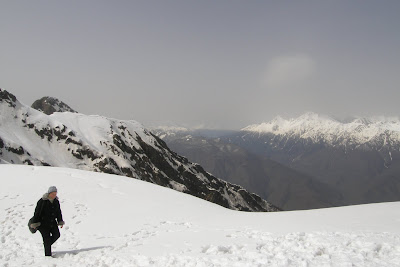 In the Caucasus Mountains Svet and I got to ride a ski lift to the top of the mountains near Sochi. We have one or two pictures of being at the top of the world. The one that you see at the beginning of this article is Svet playing in the snow! Svet & I had a very exciting ride to the top. We ate at a small cafe about half way up, the food was great and the hot tea was delicious. As the picture shows you we were a long way up…..
——————————————–
We were in the North Caucucasus:
The North Caucasus, or Ciscaucasus, is a region in north-central Eurasia and contains the larger majority of the Greater Caucasus Mountain range, also once known as the Major Caucasus mountains. Southwestern Russia, northern Georgia and northern Azerbaijan are included as North Caucasus.

The South Caucasus, or Transcaucasus, is a region in south-central Eurasia bordered on the north by Russia, on the west by the Black Sea, on the east by the Caspian Sea, on the southwest by Turkey, and on the south by Iran. The south Caucasus includes the Caucasus Mountains and surrounding lowlands. All of Armenia, Azerbaijan (excluding the northern part of Azerbaijan, which are within North Caucasus) and Georgia (excluding northern part of Georgia which are within North Caucasus) are in South Caucasus.
——————————————–
I also found this tidbit of information about the mountains: “In Greek mythology, the Caucasus or Kaukasos was one of the pillars supporting the world. Prometheus was chained there by Zeus after Prometheus had presented man with the gift of fire.

The Roman poet Ovid placed Caucasus in Scythia and depicted it as a cold and stony mountain which was the abode of personified hunger. The Greek hero Jason sailed to the west coast of the Caucasus in pursuit of the Golden Fleece, and there met the famed Medea.”
——————————————–

Yes, we enjoyed the ski ride and got to see some of the
pillars holding up the world. 🙂