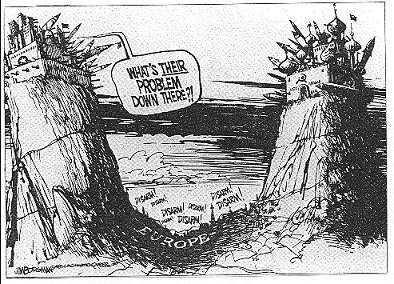 I found several articles today on the subject of Russian Churches and blessing the Nuclear Weapons. I think that this has been taken out of context for sensationalism. (Many Churches have long believed that the world will end with the “Apocalypse”.) Now according to accounts, the Russian Orthodox Church Blessed Nuclear bombs.
Lets look at some facts:

“This week, the Russian Orthodox Church gave its blessing to the men and women who control the Nuclear Weapons. Priests chanted prayers in honor of the 12th Main Directorate, which is responsible for the storage and maintenance of the country’s nuclear arsenal. 200 men and women dressed in uniforms with a atom logo on their sleeves, occasionally crossed themselves as Bishop Amvrosy of Bronnitsy, led the Blessing service. The bishop concluded by reading a congratulatory message from Patriarch Alexy II. “I congratulate you on this memorable anniversary and I raise prayers to God and to the venerable Serafim of Sarov that the nuclear weapons created by you and entrusted to you will always be in God’s hands, and will only be weapons of deterrence and retaliation.””

Sounds like they blessed the people in charge of the Nuclear weapons. (That makes sense to me)

Now the church views nuclear weapons as something of a deterrent factor for the Russian state and the rest of the World. The history of the past 15 years shows that Russia’s nuclear capability helped it remain an independent state and helped control an ambitious USA. The church views the weapons themselves as evil but a necessary evil! (The history of the Cold War era shows that the two Super Powers were stalemated.)

This same stance was in America also, The Catholic Church has made it well known that weapons are evil but if used correctly they are a deterrent to war.

Nuclear Weapons have been considered the end of man kind, (after the initial bombing of Japan.) The results of the bombings, let the world know that subsequent usage of such weapons would result in the destruction of Humanity as we know it.

So as I see it, This is a normal part of typical Church and Military relationships. Granted this relationship was broken and or hidden for many years in Russia. Now though, the ties with Church and State are growing stronger in Russia and this is a sign that the bond is stronger than in the past.

I think that is a good thing.